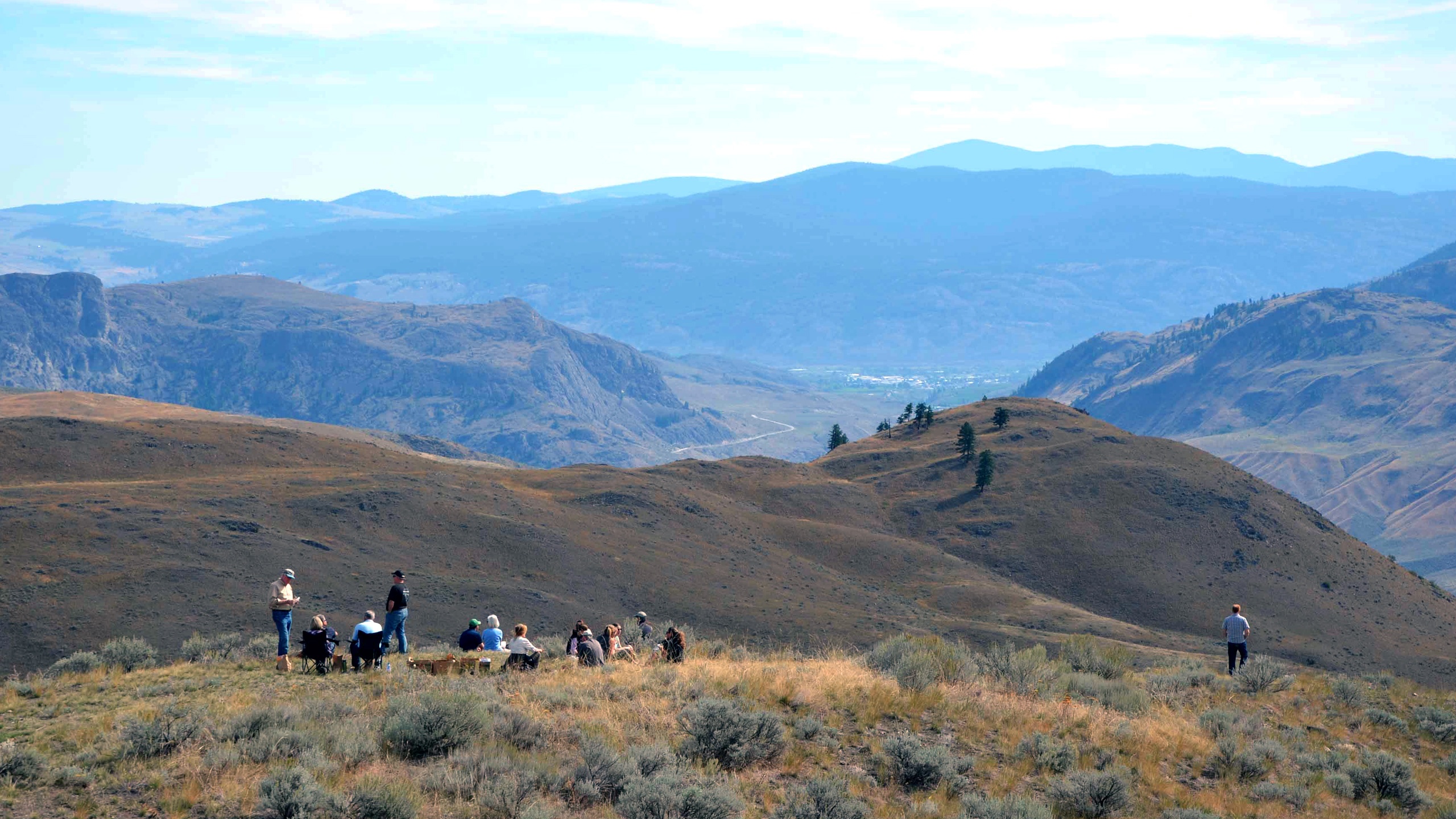 The HCTF Board of Directors is made up of
leaders in science and conservation. Appointees come from government, the BC Wildlife Federation, the Guide Outfitters Association of BC, and the BC Trappers Association, who recruit additional individuals to bring diverse perspectives and experience
from across BC.

Greg joined the HCTF Board of Directors in 2018 shortly after retiring as the first Executive Director of the Forest Enhancement Society of BC that was created by government in 2016. Prior to joining FESBC, Greg retired from the BC government in 2011 following a 35-year career with both the BC and Alberta Forest Services. Coming to BC in 1992, Greg spent 12 years as an Operations Manager responsible for day-to-day program delivery in the former Invermere Forest District, during which time he also coordinated and led the “Enhanced Forest Management Pilot Project” that was established to develop innovative forest management practices for province-wide application. From 1996 – 2004, Greg initiated and led BC’s first “Rocky Mountain Trench Ecosystem Restoration Program” and was a founding member and inaugural Chair of the BC Prescribed Fire Council during that time. In 2004/05, Greg successfully completed an assignment as the government appointed decision maker responsible for implementing the Province’s then controversial “Bill 28 – Forestry Revitalization Act” in the central and southern interior. Serving as the Province’s first Ecosystem Restoration Manager from 2005 until his retirement, Greg was nominated for the British Columbia Excellence Award in Forest Management in both 2009 and 2010 for his innovative leadership in this role. After retiring, Greg served a decade as the Chair of the Columbia Basin Trust’s Environmental Advisory Committee. He continues to serve on the technical review committee for the Columbia Valley Local Conservation Fund. Greg is currently serving a third term as a Councillor for the District of Invermere and previously served four terms as a Trustee and Chair for Rocky Mountain School District #6. Greg has a BSc in Forestry from the U of A and a MSc in Wilderness Management from Colorado State University.

Harvey Andrusak is the President of Redfish Consulting Limited in Nelson. He specializes as a biological consultant in freshwater fisheries biology, with expertise in kokanee and rainbow trout biology. Harvey has also served as Director, Fisheries Branch and Manager, Fish Culture in the Ministry of Environment, Lands and Parks and as the Regional Fisheries Biologist in the Ministry of Environment. Harvey is a graduate of the University of British Columbia with both a Bachelor of Science and a Master of Science.

Ken received his B.Sc. and M.Sc. at UBC in the Zoology Department, specializing in aquatic ecology, and an M.A.Sc. and Ph.D. at UBC in the Faculty of Applied Sciences in Civil and Environmental Engineering. He worked for the Ministry of Environment in the Fisheries Research and Development Section on the UBC campus from 1979 to 2005, initially as a project biologist, and eventually as Section Head for Fisheries Restoration and Bioengineering. While in this position he conducted a set of large-scale adaptive management experiments, and is internationally recognized for his research in the design, operation and effects of hypolimnetic aeration systems, lake/reservoir fertilization, and stream/river enrichment. Ken received the Murray A. Newman Award for Significant Achievement in Aquatic Research in 1997, Fisheries Professional of the Year from the BC Ministry of Environment in 1999 and the Seth Diamond Award for Interdisciplinary Conservation Research from the University of Idaho-Moscow and University of Montana-Missoula in 2001. Ken transferred to the Greater Vancouver Regional District from 2005 to 2007 as Senior Engineer and was the project lead for the Environmental Management team, with responsibility for raw drinking water quality, and monitoring the environmental effects of wastewater discharges from the regions five wastewater treatment plants and municipal water withdrawals from the Capilano, Seymour and Coquitlam rivers. Dr. Ashley is currently Director of the Rivers Institute at BCIT, an instructor in BCIT’s Ecological Restoration Program and is an Adjunct Professor in Civil Engineering at UBC.

Don Wilkins grew up in the Grand Forks – Christina Lake area of BC. Moving from Victoria to Prince George, with a degree in Education, he taught high school sciences for 33 years, retiring in 2006. In addition, he worked for 13 years as part time Provincial Emergency Program Area Coordinator. Don is an avid trapper, shooter and hunter. He is a past President of the BC Trappers Association and a past President of the Spruce City Wildlife Association. He has been a CORE instructor and is currently a Master Instructor for federal PAL courses. He has travelled the province extensively.

David is Executive Director of Knowledge Management Branch in the Ministry of Environment. He has worked for the provincial government since 1996 when he started in Kamloops with Fish and Wildlife Branch as the Regional Fish Inventory Specialist. David moved to Victoria in 2004, to become Business Applications Specialist focusing on systems and information technology to make fish and fish habitat information available to the public and decision makers. In 2007 he became manager of the Ecosystems Information Section and most recently Executive Director in 2014. The Knowledge Management Branch is currently responsible for: fish, wildlife and ecosystems information and systems; snow, ground water, surface water and other climate related data and information gathering networks; State of Environment reporting; the North Road Analytical Chemistry Lab; and, the JT Fyles Natural Resources Library. David is also one of the government representatives on the Fish and Wildlife Compensation Program – Columbia Board. Prior to joining the BC public service, David worked for 6 years as an environmental consultant and was involved with freshwater and marine projects around BC including: the Stikine, Haida Gwaii , the Lower Mainland and Vancouver Island. David holds a B.Sc. from UBC and is a Registered Professional Biologist. Away from the office, he enjoys cycling, swimming, boating and fishing, and lives in Victoria with his wife Jodi and their three children.

Al is a professional forester with 45 years experience spanning government and consulting. Born in Burns Lake, he lived in a variety of communities in the northwest while growing up, including Queen Charlotte City, Kitwanga, Terrace, and Prince Rupert. His early career saw him stationed in Houston, Lower Post, Ootsa Lake, and Smithers. During a second stint in Houston as forest district manager, he also served as president of the Professional Foresters Association, and board chair for Northwest Community College. In 1994 he was appointed regional manager for the Prince George Forest Region, and for awhile worked concurrently as executive director of Forest Practices Code Implementation. In 1998 he moved to Victoria to take on the role of vice president for land and resources at Forest Renewal BC and was later promoted to chief operating officer. In 2002 Al started his own consulting firm and has since worked with a wide variety of industries, communities, and governments across the province, nationally and internationally on natural resource and management matters. From 2004 to 2007 he served as president of the McGregor Model Forest and was a founding director of the Canadian Model Forest Network. He is a past member of the Forest Appeals Commission and Environmental Appeals Board and was chair of BC’s Forest Practices Board from 2010 to 2013. When not in Victoria or travelling, Al will likely be found at the family cabin on Uncha Lake.

Les Husband was born and raised in Revelstoke and after pursuing a degree in Education at UBC decided that a career in what was then known as the Forest Service was a better option. This also led Les to move with his family to Prince George in 1993. Les has held a number of positions with the Forest Service, including in Revenue, Small Scale Salvage and as a Woodlands Manger with BC Timber Sales. The past 12 years Les has been a manager with the BC Wildfire Service, 10 managing the Prince George Fire Center and the last two as the Deputy Director until his recent retirement after 32 years working for the Provincial Government. Les’s interests have always included sports, having played college basketball and volleyball and the outdoors where Les continues to be an avid angler, hunter and trapper. Outdoor interests are what have led Les to 40 years of involvement in conservation organizations, from local Fish and Game associations to being involved on the Board of Directors of the Wild Sheep Society, BC Trappers Association and the BC Wildlife Federation where he also served as president. Les has two children and summers are spent camping and fishing with family and friends on the many lakes of central BC while the fall usually includes a fly in trip somewhere in northern BC.

Laura is the Executive Director, Natural Resources within the Resource Stewardship Division of the Ministry of Forests, Lands, Natural Resource Operations, and Rural Development (FLNRORD). In this role, she has strategic oversight for freshwater fisheries and aquatic habitat, wildlife and habitat, water resources, and Indigenous stewardship forums. Laura has worked for federal, provincial, and local governments, non-profit, and the private sector, with the majority of the last 15 years in the BC Public Service across a variety of natural resource management files. She has worked on legislation, policies, practices, initiatives, and programs in climate action, modernized land use planning, and across the breadth of regional operations of FLNRORD. Laura has a keen interest in building collaborative solutions to natural resource challenges and fostering organizational effectiveness to achieve those aims. She holds a B.Sc. in Physical Geography from McGill and an M.Sc. from UBC in Resource Management and Environmental Studies. Away from the office, she enjoys cycling, sailing, swimming, and gardening, and lives in Victoria with her husband Louis-Philippe and their three children.

Kathy Parker is a wildlife ecologist and physiologist. She retired from university teaching and research in 2019 after 25 years at the University of Northern British Columbia (UNBC) in Prince George. She was a founding member of the University in the Forestry Program, which became part of a larger interdisciplinary Ecosystem Science and Management Program. Kathy obtained her PhD in Zoology from Washington State University, working on the energetic constraints of snow and variable temperatures for mule deer and elk. Before joining UNBC, she conducted research on coastal black-tailed deer and associated values of old-growth forests in BC and Alaska; muskoxen and tundra caribou in the Arctic; and pronghorn antelope and pygmy rabbits in sagebrush ecosystems. At UNBC, Dr. Parker and students researched wildlife-habitat interactions and vulnerabilities to changing landscapes for species as diverse as flying squirrels and woodland caribou. During 20 years she served as the Ian McTaggart-Cowan Muskwa-Kechika Research Professor, working to quantify the ecological web of interactions among focal large mammals (Stone’s sheep, caribou, moose, elk, wolves, grizzly bears) in the remote Muskwa-Kechika Management Area of northern BC. Kathy has been honored for her commitment to wildlife conservation and management by receiving Teaching in Excellence Awards from UNBC and Publication Awards from The Wildlife Society. She was a recipient of the BC Premier’s Innovation and Excellence Award for the Muskwa-Kechika Management Area Program involving UNBC, the Muskwa-Kechika Advisory Board, and the BC government. Kathy was named a Fellow of The Wildlife Society (an award given to individuals who have distinguished themselves through exceptional service to the profession), and she remains a Professor Emerita at UNBC.

Dan Buffett joined the Habitat Conservation Trust Foundation as Chief Executive Officer in February 2020. Dan brings over 25 years of conservation experience from years spent protecting and restoring BC's wetlands with Ducks Unlimited Canada. During that time he completed a master’s degree in Resource and Environmental Management from Simon Fraser University. Dan’s background in hands-on habitat restoration and conservation planning serves him well as he leads HCTF in our mission to improve conservation outcomes for BC’s fish, wildlife and habitat areas.

Appointed by the Guide Outfitter Association of BC - Bio Coming Soon