Columbia Lake sits at the head of the Columbia River, nestled between the Purcell and Rocky Mountains, about 7km South of Fairmont Hot Springs. The lands surrounding the lake are part of the East Kootenay Trench Ecosection, home to one of the largest and most diverse assemblages of species in the province. These include many of BC’s iconic large mammals, supported by a mosaic of habitat types that include native grasslands, Douglas-fir forests, and long stretches of wetland that comprise one of the last intact portions of the Pacific Flyway.

In 2010 and 2011, HCTF was approached by the Nature Conservancy of Canada (NCC) to help secure both the Marion Creek Benchlands (204 ha) to the west of Columbia Lake, and Lot 48 (127 ha) on its eastern shore. These properties were “missing links” in established tracts of conservation lands, which risked being fragmented by residential development. Both contain grasslands used as vital winter range for ungulates, including blue-listed Rocky Mountain Bighorn Sheep. They also provide critical habitat for non-game species, such as the red-listed Badger, and are used as movement corridors by wildlife including Grizzly Bear and Elk. HCTF contributed $750,000 towards the purchase of these properties to protect their habitat values and ensure long-term connectivity between conservation lands, while simultaneously ensuring they would be accessible to the Foundation’s contributors. 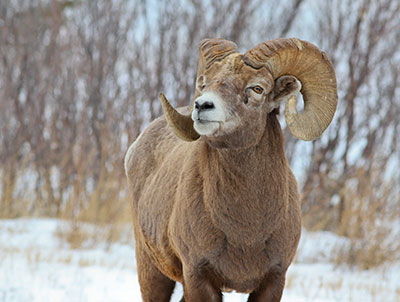