HCTF’s Caribou Habitat Restoration Fund (CHRF) provides funding for restoration of critical habitat for BC’s caribou herds. This includes multiple projects designed to benefit the Klinse-za herd led by the Nîkanêse Wah tzee Stewardship Society, a joint initiative of the West Moberly and Saulteau First Nations. The Society is working in partnership with a team from Wildlife Infometrics to restore disturbed habitat. Wildlife Infometrics recently shared the following update focused on the monitoring component of this work.

The Klinse-Za herd area, located between Mackenzie, Chetwynd and the Peace Arm of Williston reservoir, used to support a herd of almost 200 caribou as recently as 1995 and was said to be so numerous in historic times as be “like bugs on the land”. However, the herd has declined to under 40 individuals by 2013. Across BC, many caribou herds have experienced the same steep declines, and most of the struggling herds are inhabiting areas with generally more human disturbance and activity on the landscape. Specifically, industrial development has contributed to caribou declines as their habitat has been altered, displacing the caribou and making them more susceptible to predation. Since 2013, costly and intensive management efforts including maternity penning and predator removal have helped halt or reduce the rate of decline in some herds. However, these activities are not going to keep caribou on the land base over the long term. To improve caribou habitat, support the ecosystem and balance the predator-prey dynamics, we are implementing a large-scale habitat restoration project in the Klinse-za caribou herd area. 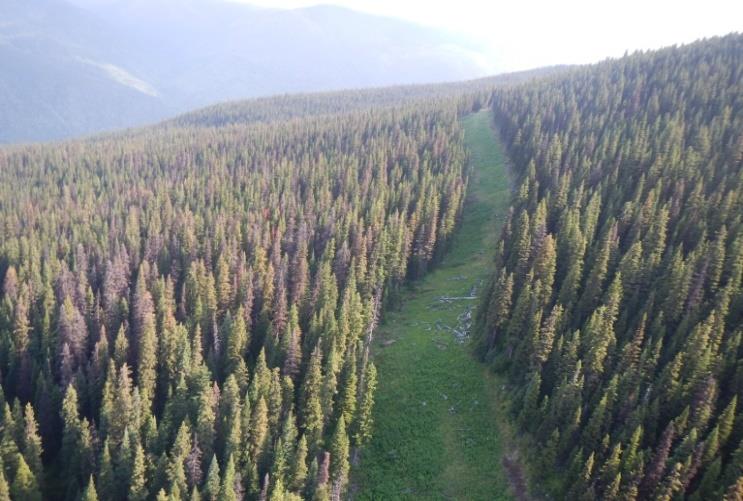 A road from low to high elevation provides an easy travel corridor for predators to access alpine refugia for caribou.

Restoration of habitat can involve a variety of activities. In the Klinse-za habitat restoration program, we focus our efforts on reforesting and restructuring linear features (e.g., old roads, seismic lines). This will limit the ability of predators to easily access caribou habitat and minimize caribou- predator interactions. Over time, reforesting the features will return the ecosystem to a more natural state. 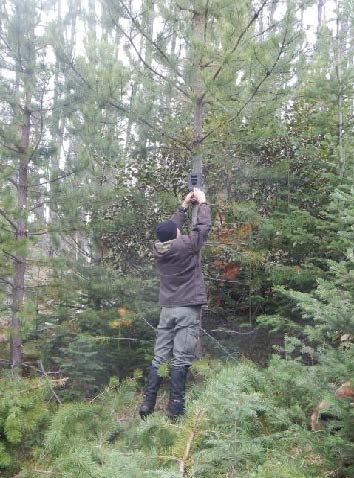 Our restoration project has two components, both equally important to the long-term success and usefulness of this endeavor. The ‘implementation’ piece is where features on the landscape actually change the way they look, appear to wildlife, or function within the ecosystem. These are the actions that include road structure modifications, tree planting, access alterations and other physical changes. To evaluate how much of a difference these changes made and how caribou and other wildlife are responding to them, we have a detailed monitoring program of data collection and analysis. It’s the monitoring that allows us to understand whether we’re meeting our objectives and make improvements to our plans if necessary.

Currently, our monitoring program has two main components: measuring changes in vegetation in response to restoration of linear features, and tracking wildlife and human road users through a network of trail cameras.

Motion activated trail cameras allow us to ‘have eyes’ across very large spatial extents, at all hours of the day and night. Since we currently have 200 cameras deployed across 7 different sites, we are monitoring a total of about 50 km of linear features. This large scale has allowed us to capture some interesting, valuable and sometimes surprising footage of the four-legged residents of our project area. One of the most vivid observations to date has been the large number of grizzly bears across the area – we have observed many sows with 2 to 3 cubs in tow, large males and several bears having a good scratch on trees, though our favourite picture remains a beautiful sunset image of a sow walking down the road with her three cubs! 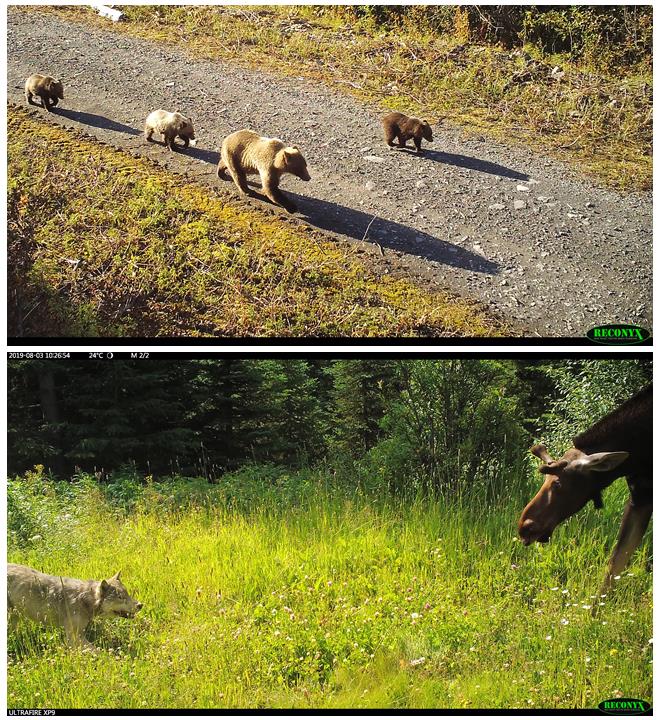 Above: a grizzly sow walking down the road with her three cubs. Below: a tense face-off between wolf and moose – we don’t know what the outcome was.

We have also observed a wide suite of other predators, including black bears, wolves, cougars, lynx, coyotes, wolverines, and more. While we are hoping to reduce predator access into alpine areas, it is nonetheless interesting to see such a diversity of predators in one area. We also see ungulates making extensive use of the linear feature, with moose being most abundant. Caribou and elk are both seen periodically.

Vegetation sampling: getting into the weeds

Tracking vegetation is important for two reasons. First, plants are essential as they form the basis of the food chain: vegetation provides energy to herbivores (large and small), who in turn support a variety of predators. Second, plants are highly responsive to environmental conditions such as moisture, shade, and soil type, and can thus be effectively used as indicators of habitat change. Since our goal with restoration is to alter existing linear disturbances so that they more closely resemble the surrounding habitat, we use a ‘before-and-after’ vegetation sampling approach. Specifically, we are collecting data about the plants on and near the linear features now (the ‘before’), and will collect the same data at intervals from one to ten years after we carry out the restoration activities, so that we can evaluate whether the restoration has been effective. 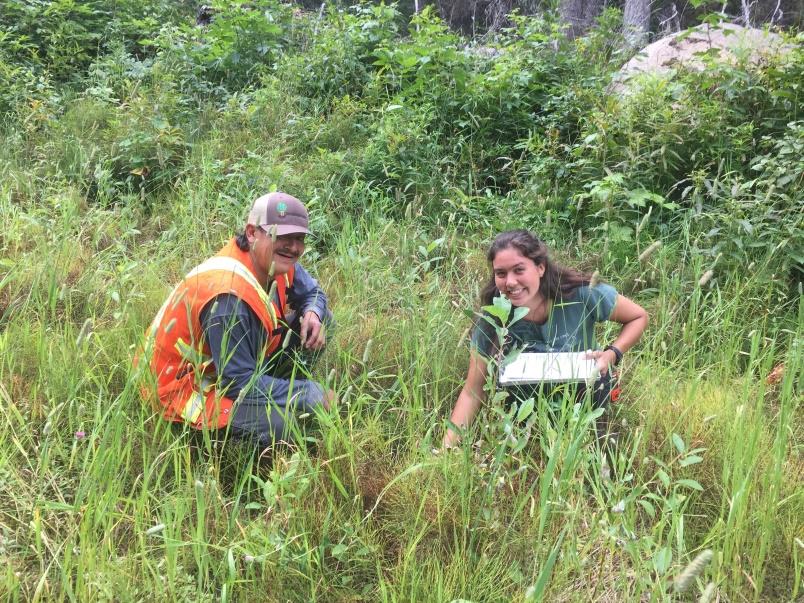 While spending long field days identifying and counting plants can be a little hard on the back and somewhat repetitive, there are many delights in this work for the ‘plant nerds’ on the project. Identifying rare species or unusual color variants keeps us on our toes and sometimes requires impromptu group debates right on the mountain. Because the sampling sites are spaced hundreds of meters apart, we get to hike through a variety of elevations and ecotypes and see beautiful country. Finally, this kind of intensive field sampling provides valuable real- world training opportunities in plant identification, and so we include First Nations community members and/or summer students on our crews to help them develop their expertise and confidence.

Thanks again to Wildlife Infometrics on behalf of the Nîkanêse Wah tzee Stewardship Society for providing this update on their work!