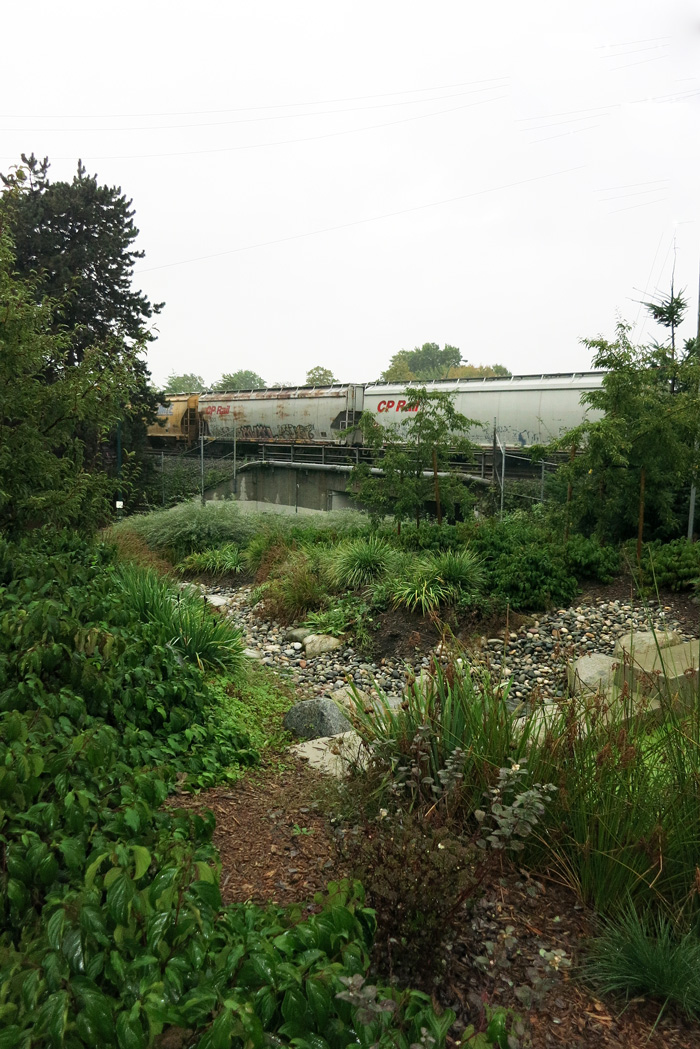 The weather may have been less than ideal, but it didn’t stop HCTF Board & staff members from setting out to view some of the sites being restored as part of the Burrard Inlet Restoration Pilot Program (BIRPP). BIRPP was created by HCTF to invest court-awarded funds from the 2007 Burnaby oil spill in projects that would restore habitat near the site of impact. By soliciting specific types of proposals and setting minimum fund leveraging requirements, this pilot program represents a shift from HCTF’s historical granting model, and Board members were eager to see the results of this new type of investment strategy.

The morning began at New Brighton Park in East Vancouver. A weathered sign at the entrance to the park boasts that this is birthplace of Vancouver, home to the City’s first post office, dock, CPR and customs office back in 1865. Now it exists as waterfront recreation area, built on fill and leaving little evidence of the salmon-bearing stream that once flowed through here out into Burrard Inlet. As part of the 2011 Hastings Park and PNE Master Plan, the City of Vancouver has started to unearth Renfrew Creek, one of Vancouver’s many lost streams. The first phase of the Plan involved the creation of the aptly-named Creekway Park. The City has converted an overflow parking lot back into a rich greenscape of native vegetation surrounding an unearthed section of creek. The park will eventually become part of the planned ecological corridor running from Sanctuary Pond in Hastings Park through New Brighton Park and out to Burrard Inlet. As part of BIRPP, HCTF provided a $5000 seed grant to BCIT student Sarah Nathan to assess water quality and terrain of the park. The data collected will be incorporated into the City’s plan to construct a saltwater marsh habitat on Burrard Inlet and daylight the section of the stream that will to connect it to the Creekway Park project.

Our next stop was Stanley Park, where HCTF provided a $55,000 grant to the Stanley Park Ecological Society to restore access for salmonids to Beaver Creek. Flowing from Beaver Lake out into Burrard Inlet, Beaver Creek is one of only three remaining salmon-bearing streams in the City of Vancouver. Historically, this waterway supported populations of both coho salmon and coastal cutthroat trout, but development and degradation of Beaver Lake has caused the stream to deteriorate to the point where the survival of these fish is threatened.

Since 2010, the Stanley Park Ecology Society has been actively engaged in monitoring the water quality and fish populations in Beaver Creek to assess potential activities to restore and enhance habitat. Last year, the Society initiated the first phase of a creek restoration project, which included stabilizing creek banks by removing invasive plants and replacing them with native species to boost habitat for insects, the main diet of fish in the creek. The next phase of the project will use BIRPP funding to improve fish access by both reducing the height of the seawall barrier and constructing a step-pool at the Pipeline Road bridge fish barrier to allow fish to enter the creek under a variety of stream flow conditions. The Society also plans to create a pocket estuary next to the seawall to improve spawning and rearing habitat for fish. 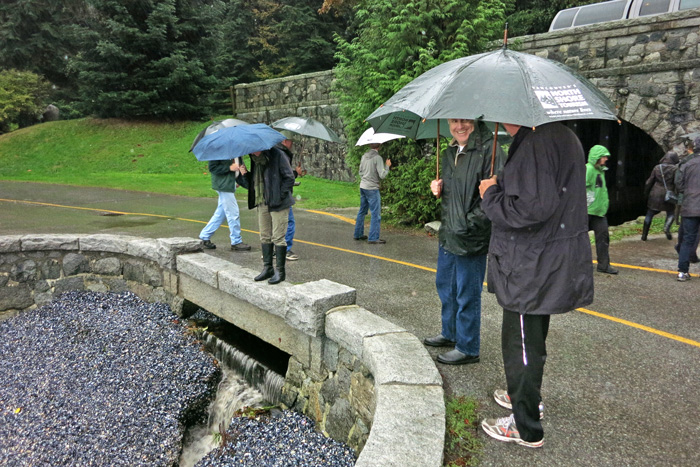 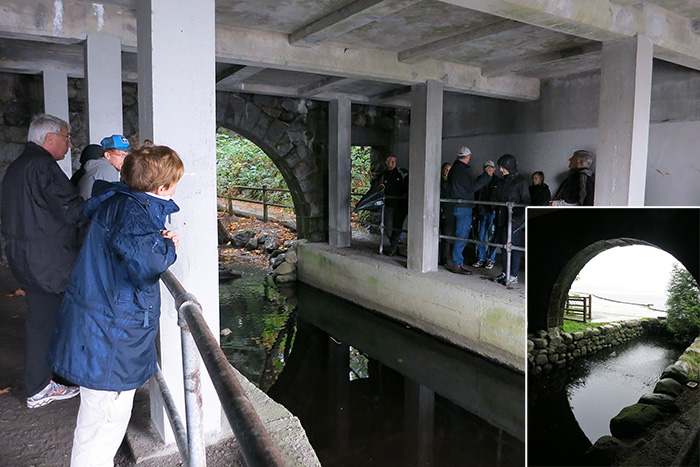 Next, we headed across the bridge to Vancouver’s North Shore to view the first project completed under the BIRPP program. It’s been one year since the finishing touches were put on the restoration work at MacKay Creek , and even the heavy rain couldn’t detract from its impressive transformation. 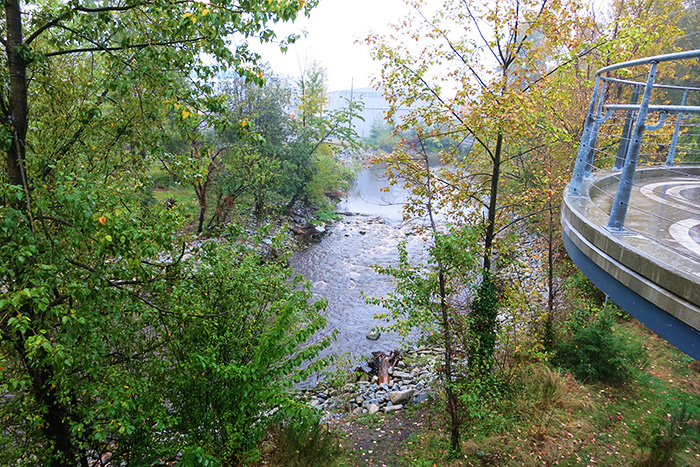 In 2013, Northwest Hydraulic Consultants received a $160,000 grant for this project, which included removal of a concrete weir blocking fish from entering the creek at low tide. The barrier made them easy pickings for hungry seals feeding in the lower part of the estuary. 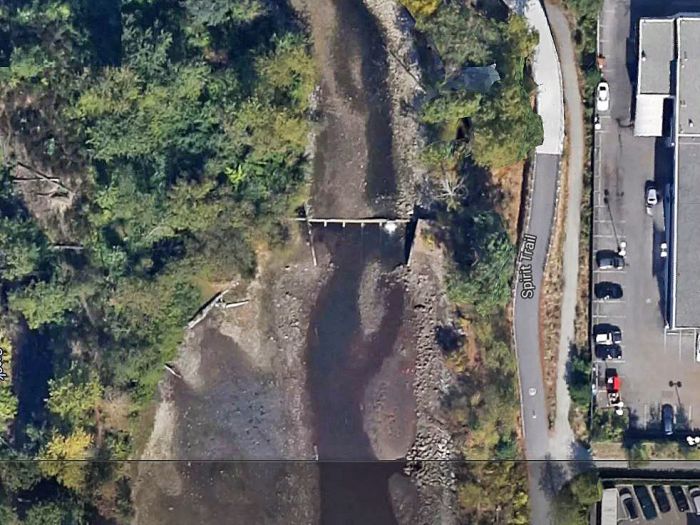 The weir was replaced with a naturalized creek outlet. The project also included construction of a saltmarsh and planting of native vegetation in the place of invasive species removed from the shoreline. Neighbouring Bodwell High School helped with the planting, and their Director of Residence Stephen Goobie put together a great compilation of photos showing the site’s progression from degraded habitat to functional pocket estuary:

From MacKay, we walked to Mosquito Creek Estuary, where work has yet to begin on the most degraded site being restored as part of the BIRPP program. Mosquito Creek has been heavily impacted by urbanization: historically, the site supported a large estuary, which was dredged and filled to the point where it no longer exists. HCTF has provided an $88,500 grant to the Squamish Nation to restore some of what was lost through the creation of a 1000sq m intertidal reef and benches that will provide habitat for native fish and other estuarine species. Work on the Mosquito Creek project is scheduled to begin next month.

Our last stop was Seymour River Estuary, where Board Members were able to view the most recent restoration work funded by the BIRPP program. HCTF Board Member Dr. Ken Ashley and his colleague Dave Harper explained how students of BCIT’s Ecological Restoration program had created cover for juvenile fish by attaching giant logs to boulders with epoxy and steel cable. 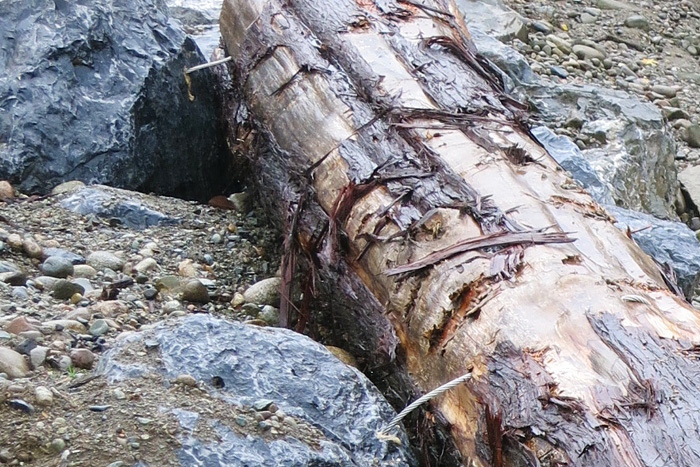 You can listen to Dave Harper speaking about the project (under clearer skies) in this news segment from JoyTV:

HCTF provided $60,000 to the Seymour Salmonid Society for the restoration of Seymour River Estuary, which is due to be completed next spring. The hatchery says the enhancements to the site will help increase survival rates for the thousands of chum, coho and steelhead smolts they release each year. 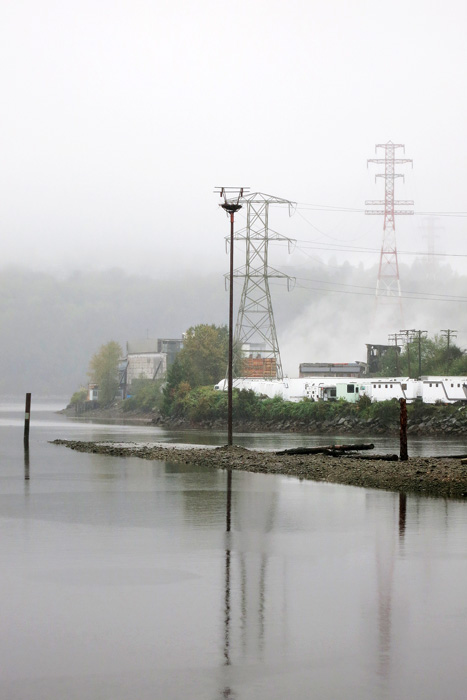 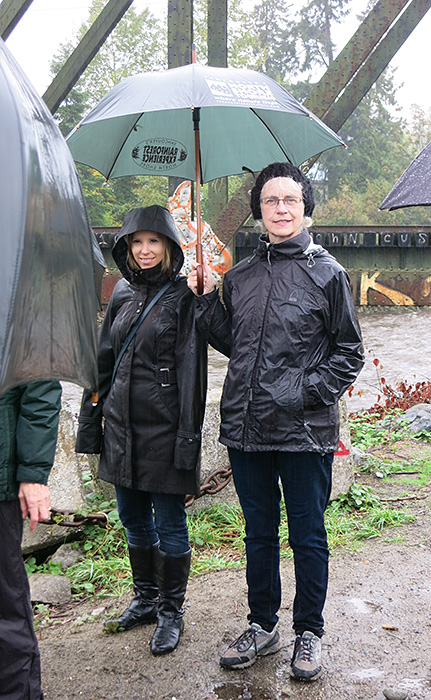 The persistent rain may have put a bit of a damper on the excursion, but HCTF Board and staff members still enjoyed the opportunity to get a first-hand look at how the Burrard Inlet Restoration Pilot Program is progressing. The work completed at New Brighton, MacKay and Seymour illustrates the potential of urban restoration projects: their footprint may be smaller than some of HCTF’s rural projects, but they show tremendous potential to inform and inspire people about how we can rewild even the most degraded of habitats. Our sincere thanks to Dr. Ken Ashley and Dave Harper for leading us on an informative journey to view a unique set of projects.