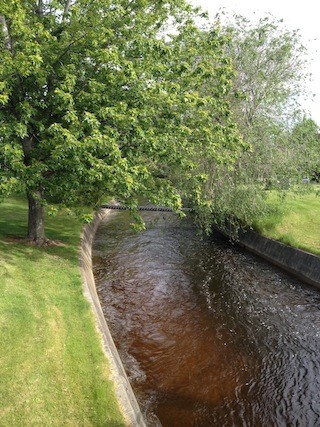 The creek, which runs right through downtown Penticton, was channelized in the early 1950’s in response to seasonal flooding. Transformed into what is essentially a concrete trough, the creek lost much of its spawning and rearing habitat for cutthroat and rainbow trout. Other tributaries to Okanagan Lake have been impacted by a range of habitat losses, resulting in a dramatic decline in fish spawning numbers from historic levels.

Now half a century old, the concrete lining the creek is failing. Rather than replacing the current structure with more of the same, the City of Penticton is using this opportunity to rehabilitate the creek in a way that will restore critical fish habitat while still providing flood protection for surrounding communities. A $63,000 grant from HCTF will provide much-needed funding to complete the design stage of the project, allowing incorporation of leading science and current best practices into the plan.

In an interview with Global News, Acting Penticton Mayor Garry Litke commented on the positive effect that creek rehabilitation will have on the surrounding environment: “The long term benefits are the health of Okanagan Lake. Fish (…) are like the canary in the coal mine: the healthier the fish are, the healthier your lake is.”

Improving fish populations will also have economic and recreational benefits for local communities. During Downtown Plan consultations, the rehabilitation of Penticton Creek was identified as among the top priorities for residents and businesses.

“Sustainability and economic activity are key factors in revitalizing Downtown Penticton and the community as a whole, and Penticton Creek rehabilitation is a huge step toward realizing both of those goals,” said Litke. “The City of Penticton recognizes the Habitat Conservation Trust Foundation and anglers, hunters, trappers and guides who contribute to the Trust, for making a significant financial contribution to support the Penticton Creek rehabilitation project. Without such support, this project would not have been possible.”

You can learn more about the Penticton Creek Rehabilitation Initiative in the City of Penticton’s Downtown Plan, in this article from the Penticton Daily News, or by watching the video segment appearing on Global News (Okanagan).