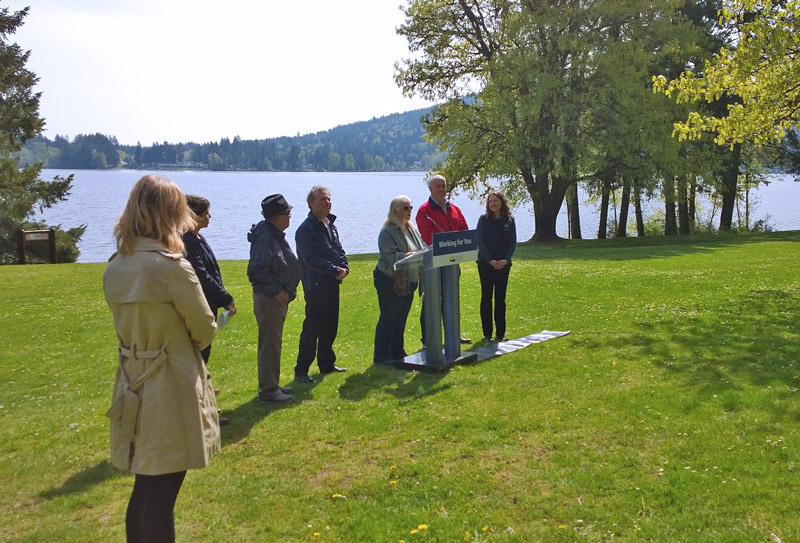 Victoria, BC – Premier John Horgan has announced the successful acquisition of Eagle Heights Grasslands near Koksilah River Provincial Park. Premier Horgan, along with Ministry of Environment and Climate Change Strategy Minister George Heyman and Cowichan Valley MLA Sonia Furstenau, made the announcement on Thursday morning at West Shawnigan Lake Park. They were joined by representatives from Cowichan Tribes, the Cowichan Valley Naturalists and Habitat Conservation Trust Foundation (HCTF) who spoke about their roles in protecting this property and the value of partnerships.

HCTF contributed $400,000 to the purchase of Eagle Heights as part of its habitat acquisition granting program. HCTF CEO Brian Springinotic said the Foundation’s decision to partner with BC Parks on the purchase was because the property contains high-value habitat for many species of wildlife. “Eagle Heights is an interesting mix of habitat types, from pocket grasslands to old-growth forest,” said Springinotic. “These support a diverse assemblage of wildlife, including cougar, black bear, Roosevelt elk, and threatened species like Western Screech Owl and Northern Goshawk.” The Federal Recovery Strategy for the Northern Goshawk laingi subspecies has identified Eagle Heights Grasslands as one of 10 critical habitats on Vancouver Island. The property is also home to many rare and endangered plant communities.

Springinotic credits the province’s hunters and anglers for providing HCTF with the funding used to secure important habitat. “The reason we’re able to help with the purchase of Eagle Heights and the many other conservation properties we’ve helped fund over the years is the conservation surcharge on all angling, hunting, trapping and guide outfitting licences sold in BC,” says Springinotic. “We put a lot of effort into making sure the money raised through licence sales is invested into projects that will make a real difference for fish and wildlife. Buying land to protect its habitat in perpetuity is one way we are working to conserve this province’s incredible natural assets, for the benefit of all British Columbians.”