Project Evaluation: Bringing Back the Bluebirds 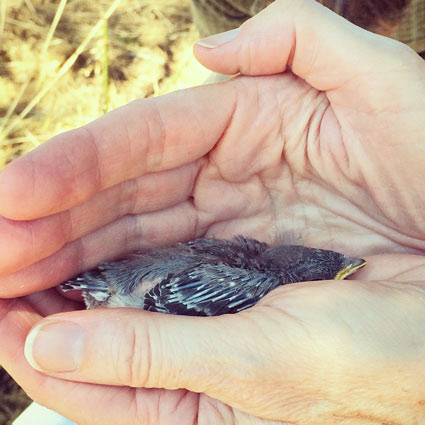 A few times a year, HCTF staff get to escape from the office and check out some of our projects in the field. We conduct project site evaluations as an accountability measure, and to gain a better understanding of the opportunities and challenges facing our proponents. These evaluations include a financial review and a site visit, where we get to see firsthand the important conservation work being done by our proponents. This summer, HCTF Biologist Lynne Bonner and Finance Officer Katelynn Sander were excited to spend some time with the Garry Oak Ecosystems Recovery Team (GOERT) and get the inside scoop on their Bring Back the Bluebirds project.

Though once plentiful, Western Bluebirds have been extirpated (locally extinct) in southwestern BC since 1995. They like to make their nests in Garry Oak meadows, but these ecosystems have become increasingly rare due to human development. As their habitat was lost and fragmented, Western Bluebirds eventually stopped returning to Vancouver Island to nest and raise their young. In their Bring Back the Bluebirds project, GOERT is aiming to re-establish a breeding population of Western Bluebirds on Vancouver Island. This project took flight in 2012, and has hatched an international partnership which allows Bluebirds from a healthy population in Washington to be re-located to Vancouver Island. There are currently multiple nest sites in the Cowichan Valley where pairs of Bluebirds have nested and are tending to their fledglings. 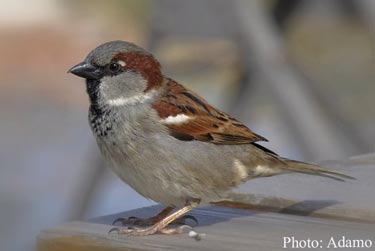 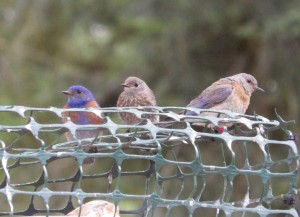 The first two years of the project enjoyed remarkable successes with 9 nestlings fledged in 2012 and 32 nestlings fledged in 2013. This year saw some challenges for the nesting bluebirds. While some bluebirds were lost to predators (likely suspects: domestic cats, mink or raccoon), the most harm came from depredation from the invasive House Sparrow. These small birds are highly territorial and aggressive, attacking any birds (adults and nestlings) within their breeding territory. This year 6 nestlings were lost to House Sparrow attacks. Thanks to the determined efforts of the GOERT Recovery Team, volunteers and the Island Wildlife Natural Care Centre, several injured nestlings were rescued, rehabilitated and returned to the wild. You can read more about this on the GOERT website’s July 2014 news article. Despite these losses, there have been more successful nests this year than in previous years and by early August 2014, four nests had fledged successfully and four currently active nests are expected to fledge by mid-August.

We would like to extend a big thank you to GOERT Conservation Specialist Kathryn Martell, summer student Reanna Schelling, and bluebird translocation expert Gary Slater (Ecostudies Instutite, Washington) for taking the time to show us around the nest sites, and introducing us to some adorable baby Bluebirds. If you are interested in learning more about the Bluebird Reintroduction project and the Garry Oak Ecosystems Recovery Team, check out their website at http://www.goert.ca/