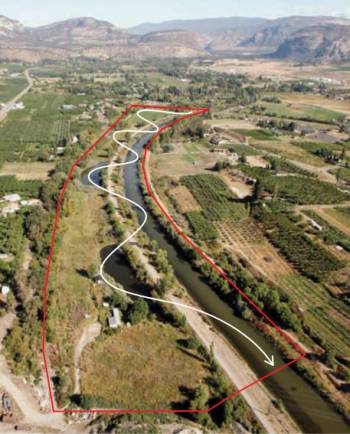 Aerial Photo of Okanagan River, with overlay showing difference before and after channelization.

As part of HCTF’s project site evaluation program, staff recently visited a restoration project on the historically channelized and straightened Okanagan River (“Okanagan River Restoration Initiative – Phase II). HCTF (along with a number of partner organizations) is currently funding the reconstruction of a side channel to improve spawning and rearing habitat for trout and salmon. This project will also benefit wildlife species by increasing riparian habitat.

In the early 1900s the Okanagan River was re-engineered from a meandering stream to a channelized and diked waterway for the purposes of navigation, flood control and irrigation. This reduced much of the fish and riparian habitats along the river. The Okanagan River Restoration Initiative (ORRI) is an alliance of government and non-government organizations dedicated to restoring portions of the river to its original configuration, providing habitat for sockeye salmon, rainbow trout and wildlife species at risk such as, Yellow Breasted Chat, Great Basin Spadefoot and Western Screech Owl.

This HCTF project is being undertaken by the Okanagan Nation Alliance (ONA) and project leader Camille Savois-Rivard proudly showed HCTF staff the new side channel which was still under construction at the time of the site visit. 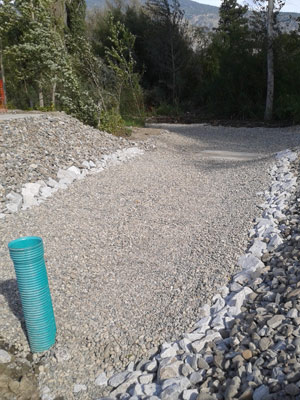 This work had been delayed for several years due to unusually high streamflows impeding the instream activities, so it took teamwork, ongoing commitment to ensure partners and landowners remained on-side and perseverence for it all to come together – thank you Camille, for helping to make it happen!

The Okanagan River Restoration Initiative was a 2010-11 BC Premier’s Award Regional Finalist. You can learn more about the project by watching the video below: