Supporting the Survival of Marten in an Era of Intensifying Fires, Climate Change and Other Pressures 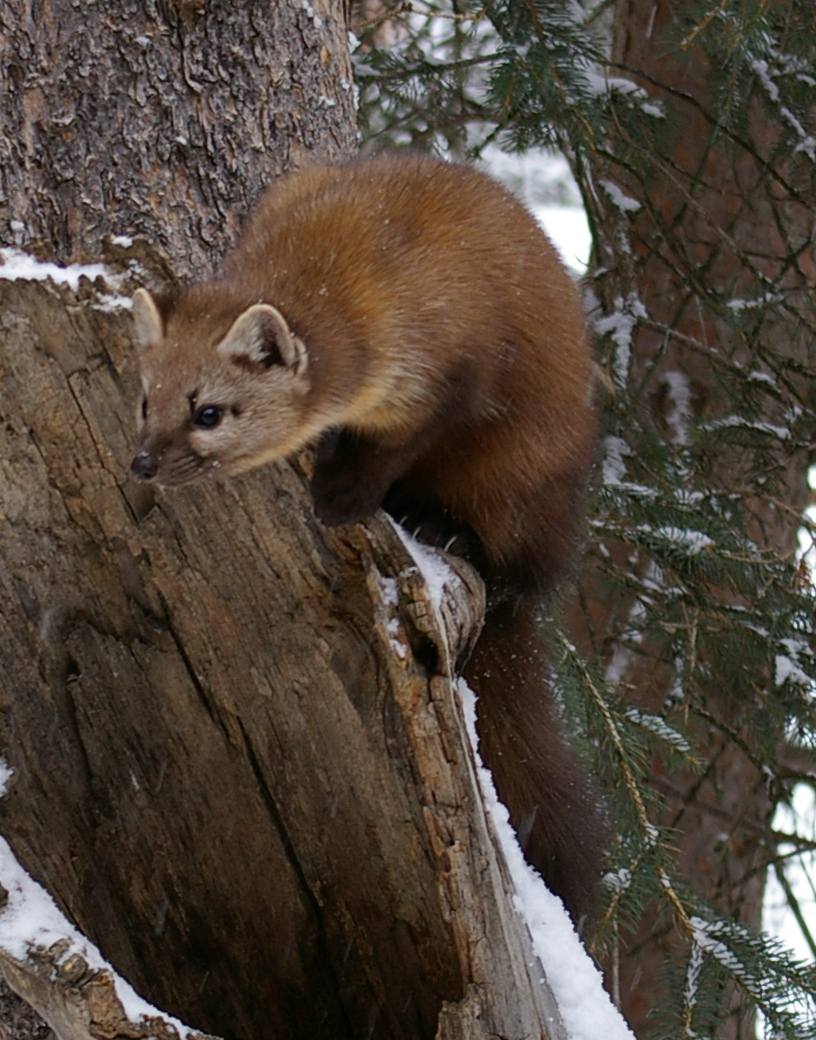 In the context of record forest fires, climate change and growing development pressure, a research project funded through a partnership between Habitat Conservation Trust Foundation and the Forest Enhancement Society of BC is exploring how American marten interact with landscapes altered by fire and salvage logging.

Logan Volkmann is pursuing a PhD under the supervision of Dr. Karen Hodges at the University of British Columbia Okanagan. For the past two years, he has been overseeing parallel American marten field projects; one is in the Okanogan National Forest in northern Washington and the other is being pursued on the Chilcotin Military Reserve near Williams Lake, BC.

As Volkmann explains, the new normal of more frequent and intense forest fires makes understanding how to better balance wildlife and harvest interests more important than ever.

“We know that we are going to have a fiery future and that will have a big impact on the species that depend on forests, including American marten,” he says. “The related question is, how does this inform how we manage landscapes, both before and after they’re burned?”

“From both a science and industry perspective, marten are an important indicator species because they are so dependent on forests. A lot of policy makers look at marten when setting new guidelines, including the timber industry. Because not a lot is currently known about how marten respond to the impact of wildfires, they are a really great species to consider when drafting new policy.”

After a forest fire, it is common practice for the timber industry to pursue salvage logging. Even after very intense fires, only the bark and foliage are burned off on many trees – the core wood is still marketable. However, as Volkmann points out, “there is still a lot of guesswork, for both scientists and industry, in terms of what landscape we want to leave after fire. How much should we log and how much should we leave? There are a lot of unanswered questions and I’m hoping that my work gets at least some of them answered.”

“Large fires are inherently very patchy. After a fire, there will be areas that are severely burned as well as areas with residual live trees. We’re finding that marten are making use of the residual patches of live trees. In terms of salvage logging, our initial observations suggest that it’s critical to leave some remnants of dead standing trees for marten habitat. Areas where lots of trees have been removed tend to be very open and we aren’t finding marten there. This observation is similar to what we already know about how marten respond to regular timber harvest. You don’t want to make your cuts too big, and you need to leave a little bit of clutter and residual structure.”

The research project is being pursued under the supervision of Dr. Karen Hodges, who has overseen multiple ongoing and recent HCTF-funded conservation science projects, including a current MSc project by Angelina Kelly, who is exploring how small mammals are using the post-fire landscape in the Williams Lake region. Both projects enjoy the support and interest of local industry, First Nations, government and trappers.

The project has been running since the winter of 2016. Volkmann has overseen two winter field seasons and one summer season; in 2017, summer fieldwork was impossible due to active forest fires.

In winter field season, a typical day starts with a 30 minute snowmobile ride. Depending on the weather, the team will either run a survey for marten tracks, or find and follow marten trails. They record GPS data from these trails to capture how the animals move through the landscape, and use that data to inform vegetation surveys during the summer field season. Starting in 2017, the team has also deployed remote wildlife cameras. 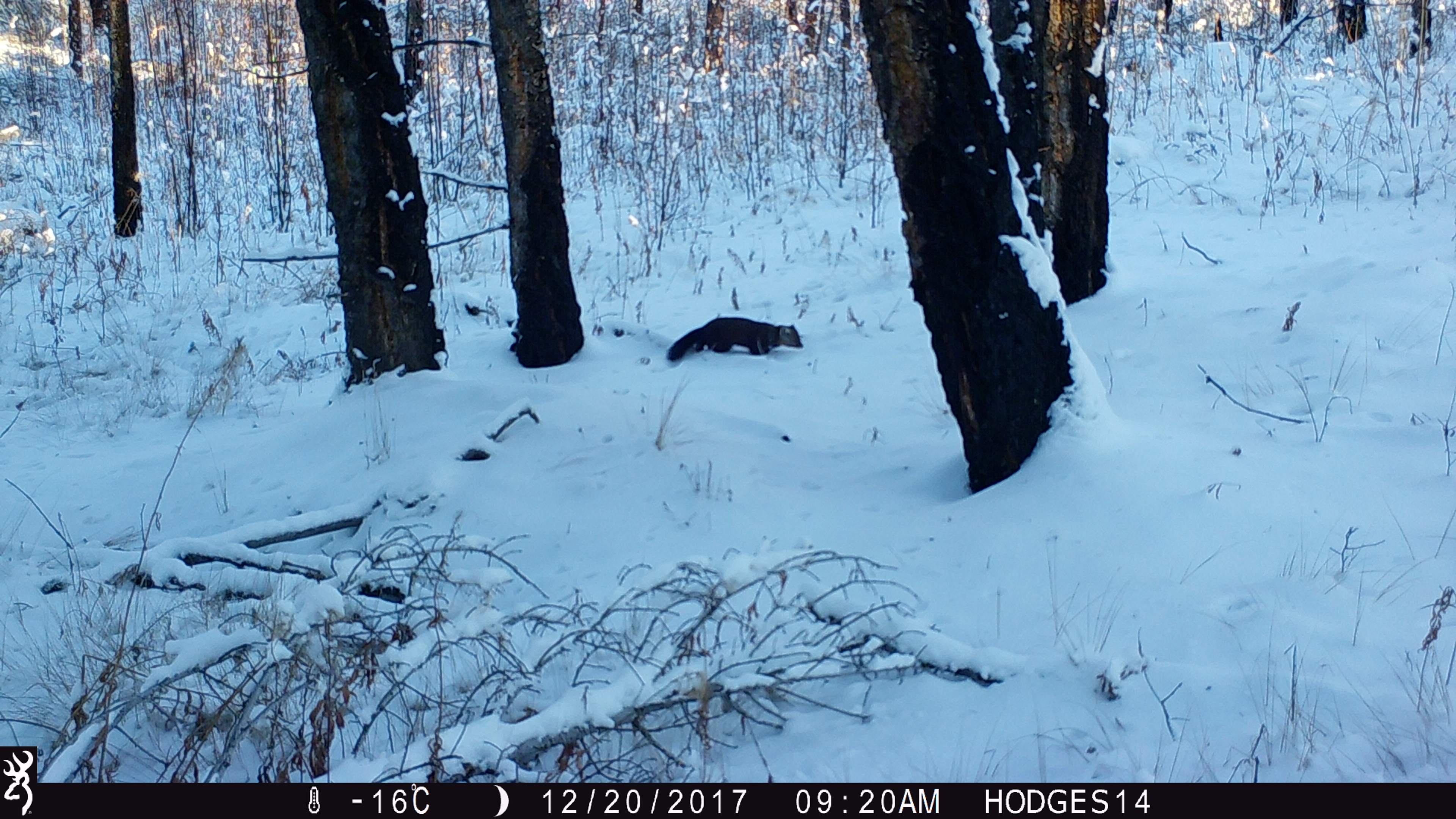 Data gathered from this project will also shed light on how other carnivores are using the landscape and adjusting to post-fire conditions. “It’s a different story for every species, depending on how strongly they need forest structure,” says Volkmann. “Species like weasels and coyotes are comfortable in more open habitat so we’re finding they are making use of salvage logged areas more than species like lynx, who are very dependent on forests.”

Staff from British Columbia’s Ministry of Forests, Lands, Natural Resource Operations and Rural Development (FLNRORD) have also been a great source of support.“FLNRORD staff have been kind enough to provide a lot of the GIS data that we need for analyzing how marten use the landscape. They provide all the mapping data in terms of forest fire size and severity. They also give us leads on local resources – where to go for housing, who to talk to for snow mobile repairs. Having never worked in Williams Lake before, they were wonderful in terms of connecting us to the local network,” says Volkmann. In particular, he says, Becky Cadsand and Carole Mahood provided key support.

Another source of expertise has been Larry Davis, a wildlife biologist conducting HCTF-supported research on fishers in the same region. “He has been extremely helpful, in terms of getting us equipment and providing local knowledge on where we should be looking for marten,” says Volkmann.

Volkmann says that it’s vital to remember that the uncertainty associated with climate change affects wildlife as well as humans, “More than ever, wildlife are contending with a landscape that’s broken up with roads and cities. As their landscapes change, they will have a harder time moving to new suitable areas. That means that understanding how animals perceive and move across landscapes, and how they respond to landscape change, is going to be more important than ever.”

HCTF is grateful for researchers like Mr. Volkmann and Dr. Hodges as well as the generous community of local conservationists, who are working together to help inform long-term decision-making to support the people and wildlife who rely on BC forests.