The Secret Lives of Bluebirds 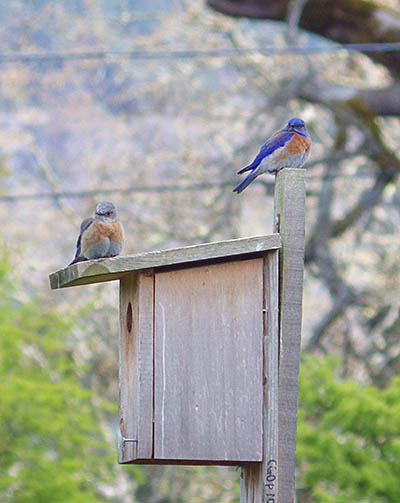 Summer’s in full swing, and so is the field season for many of HCTF’s grant recipients. Among these is the Garry Oak Ecosystems Recovery Team (GOERT) and their “Bring Back the Bluebirds” project. The project is an international partnership working within Vancouver Island communities to restore Western bluebirds to their native Garry oak ecosystems. By transporting pairs of bluebirds to the Cowichan Valley from a healthy population in southern Washington, the project hopes to ultimately re-establish a breeding population of the birds on southeastern Vancouver Island and the southern Gulf Islands, where they have been extirpated (locally extinct) since the mid-1990s. The primary cause of their extirpation is thought to be habitat loss: bluebirds are secondary cavity nesters, and historically have relied on the holes made by woodpeckers in dead trees for nest sites. As the number of potential nesting trees declined, so did the bluebirds, to the point where a local population could no longer be sustained. To mitigate this habitat loss, the GOERT project team has installed wooden nest boxes in suitable bluebird habitat as an alternative to traditional nesting cavities. Though it certainly hasn’t been smooth sailing for all of the translocated pairs, the project team has seen an increase in the bluebird population over the past three years: a mid-June count found 24 adults (6 translocated), and at least 24 juveniles.

This summer, GOERT managed to capture some footage of the pre-fledged juveniles in one of their nest boxes, offering a rare peak at life as a baby bluebird. Check out the video below to see a cozy pair of nestlings wait patiently for mom (or is it dad?) to bring them their dinner: you can skip to 1:21 to see the first adult arrive. They’re ready for seconds at 3:00, and by 3:50, you’ll see the other siblings (there are six nestlings in total) push their way into the frame for a chance at some grub. You can watch other videos from the nest box on GOERT’s website. The solar-powered “Bring Back the Bluebirds” nest cam was made possible by First Light Technologies and TD Friends of the Environment Foundation.

How can you help bluebirds?

If you happen to live in the Cowichan Valley, you can contact the Jemma Green about volunteer opportunities for this or other GOERT projects. You can also make a donation to GOERT here. Everyone can do their part to help reduce songbird deaths by keeping cats indoors or in outdoor enclosures during the spring and early summer, avoiding use of toxic insecticides, and by placing decals on large, reflective windows to prevent collisions.

Want to stay informed about this project? Bookmark the Garry Oak Ecosystem Recovery Team’s project update webpage. You can view other HCTF blog posts on the bluebird project here.