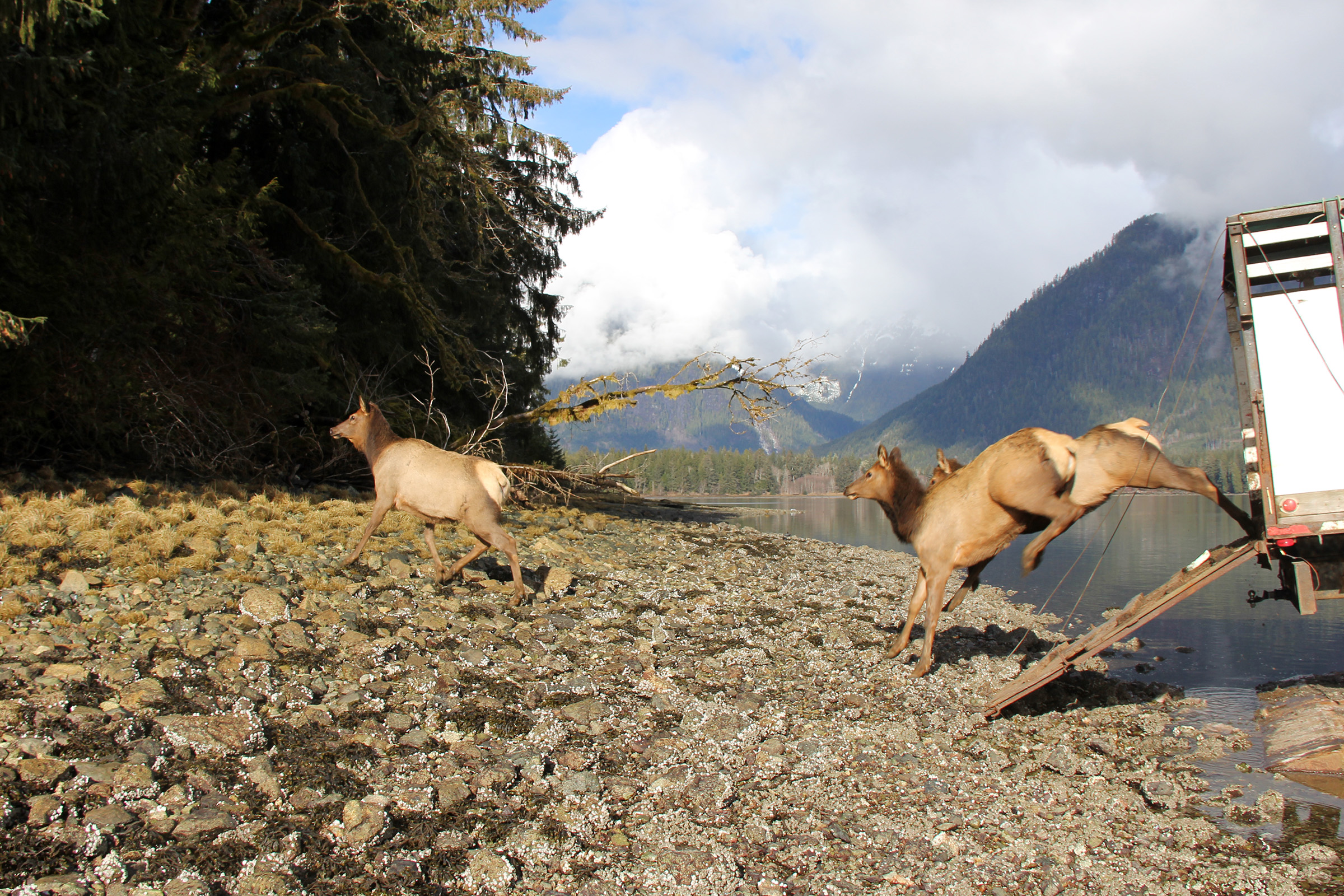 Seeing a herd of majestic Roosevelt elk is a marvelous sight for almost anyone exploring B.C.’s coastal wilderness.

Early in the last century, unregulated harvest led to extirpation of the elk from much of their range on the mainland and in many areas of Vancouver Island. Today, while the animals remain on B.C.’s list of species of concern, in some areas they are doing so well they are seen as a nuisance – raising traffic safety concerns, damaging crops and delaying maturation of seedlings. The B.C. Ministry of Transportation and Infrastructure has recorded 72 elk fatalities since 2009 on Vancouver Island, most near agricultural areas.

Billy Wilton, a wildlife biologist with the B.C. Ministry of Forests, Lands, Natural Resource Operations and Rural Development (FLNRORD), is entering into the fourth year of a five-year project aimed at identifying elk herds that are a potential nuisance, and relocating them to places where they are more welcome. The work he is leading enhances native wildlife populations so the Habitat Conservation Trust Foundation and the Forest Enhancement Society of BC provided $15,000 for the project in 2017 and another $15,000 in 2018.

“Our goals are to re-establish viable populations of Roosevelt elk where they once lived historically, and at the same time mitigate potential problems,” Billy says.

“We are expanding their current range to match their historical distribution by moving them to unoccupied watersheds where ecological conditions are suitable, removing them from areas where they present a highway traffic hazard, and represent a conflict with agriculture or industrial forest management.”

Elk translocation is not a new tool – other elk species were moved into Alaska from the southern states as early as the 1920s. “Translocation has the advantage of allowing us to target a specific herd and move them all,” says Billy. “Research shows that moving a population of 20 or more elk into underutilized habitat gives them the most success for a self-sustaining population.”

In February 2017, with support from partners and volunteers, Billy’s team moved 18 elk from the Lower Salmon Elk Population Unit (EPU) near Sayward, the traditional territory of Wei Wai Kai, We Wai Kum and K’omoks First Nations on the north Island to the Sarita/Pachena EPU, in Huu-ay-aht First Nation territory near Bamfield. In their new home, the ten cows, five calves and three yearling bulls have the potential to disperse and grow, and may even provide future harvest opportunities for local First Nation and licenced hunters.

The work began in March 2016 when project participants surveyed the Lower Salmon EPU to identify potential herds and areas where they could be contained. As winter approached and natural food sources became scarce, they worked with local Sayward Fish and Game Association volunteers, First Nations and farmers to entice the elk to move to a proposed trap site to feed. “Cow Elk weigh up to 600 lbs and bulls up to 1000 lbs so they are very food motivated animals, especially in winter,” says Billy.

Once the elk were used to feeding in the area, a large circular chain-link corral with a remote-controlled gate was put up, and they were encouraged to feed inside it. 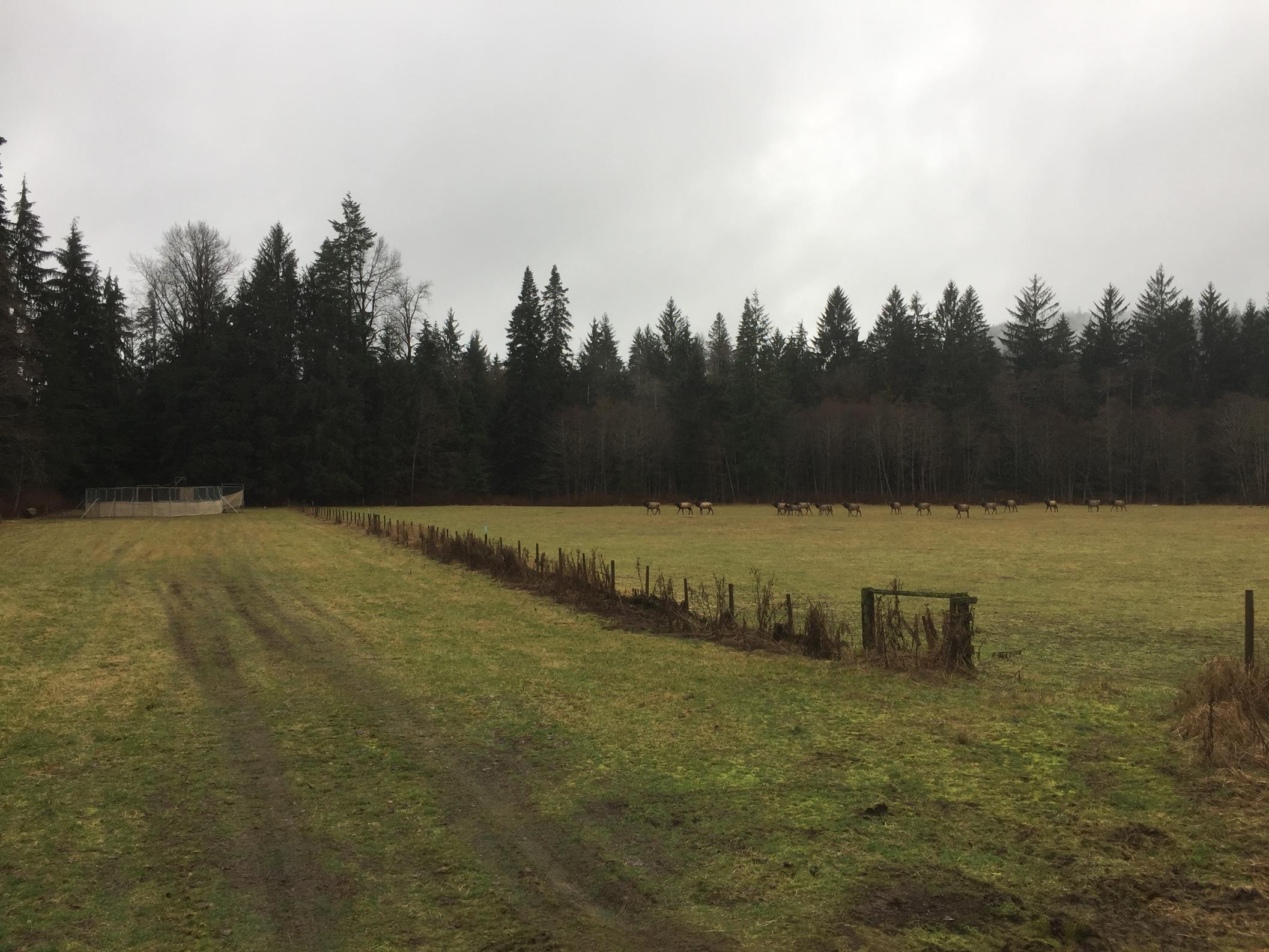 Within two weeks, the herd was comfortable moving into the corral. In mid-February, Billy’s team and the volunteers shut the gate remotely just before dusk, loaded the animals through a chute onto a stock truck, and drove them to a location near the Sarita River where they were released. Three of the cows were marked with radio collars to help assess the success of the project.

About 20 members of the Campbell River Fish and Wildlife Association helped move a herd in 2016 that was creating highway safety issues. “It is a really neat project that is right in line with the goals of our organization,” says club president Wade Major. “We do anything we can to improve fish or wildlife habitat, and assist with wildlife management.”

Roosevelt elk, the second-largest member of the deer family after moose are generalist grazers that have an impact on plant composition. Returning them to their native range increases biodiversity and re-establishes predator-prey dynamics.

The project receives funding and support from a variety of organizations – including the Ministries of FLNRORD and Transportation and Infrastructure, First Nations, fish and wildlife associations and the Forest Enhancement Society of B.C.

The transportation ministry has recorded 72 elk fatalities since 2009 on Vancouver Island, most near agricultural areas. Sean Wong, manager of biological programs, says animals that frequent busy highway corridors, especially large ones like Roosevelt elk, are a concern to transportation planners. “By supporting the translocations, we are able to reduce vehicle-animal collision risks and help rebuild elk populations in areas where they have historically been found, and where they represent less risk to the travelling public,” he says.

Since its inception in 1981, the Habitat Conservation Trust Foundation has invested more than $180 million into fish and wildlife conservation projects across British Columbia. The Foundation gives priority to projects like this one because they deliver proven results for native species.

As Billy Wilton says: “It is a pretty rare opportunity to be able to take what might be seen as a problem and turn it into a conservation solution and a success story.”

This article was first published in May-June 2019 issue of BC Outdoors magazine.