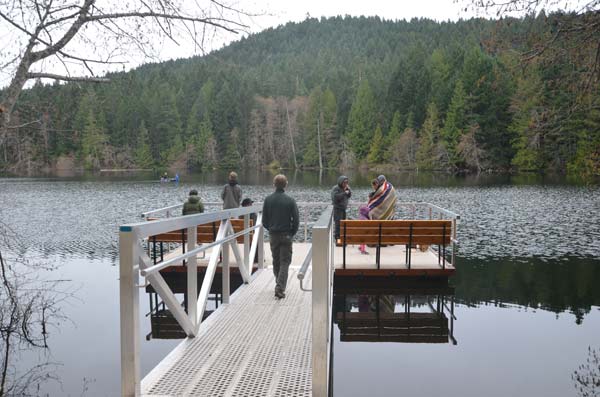 The new fishing dock at Durrance is already proving popular with anglers.

An HCTF Silver Award was presented to the Vancouver Island Urban Lakes Fisheries Development Program this week in recognition of its efforts to increase angler participation by improving fishing infrastructure at lakes near urban centres.

Scott Silvestri of MFLRNO leads the project, which has already received over $75,000 in grants from HCTF, with another $54,000 committed for 2013-14. By bringing together local governments, granting organizations and fish & game clubs, Scott and his team have made great strides in improving access to a number of fishing locations around the island while keeping costs to a minimum.

The Urban Lakes project is currently in its third and final year of funding. Infrastructure projects already complete include:

• Repairs to the walkway of the fishing float at Chemainus Lake.

• Development of a car-top boat launch for Quennell Lake.

• Improvements to the boat launch at Spider Lake.

Click here to view the locations of these projects on a map.

A number of potential infrastructure projects have been identified for 2013-14 . These include:

• Construction of fishing floats at Colwood Lake and Thetis Lake.

• Creation of boat launchs and fishing docks at Prospect Lake and Echo Lake.

Observations of increased angler use at sites where infrastructure work is complete suggest that the upgrades and additions are working: by making fishing more accessible, this project not only has the potential to inspire new groups of conservationists through participation in angling, but also increase funding for fish enhancement and restoration projects through additional licence sales.

In addition to this award from HCTF, the Vancouver Island Urban Lakes Fisheries Development Program has also been named a regional finalist in the BC Premier’s Innovation and Excellence Awards. The awards, which will be handed out in September, recognize exceptional work by B.C. public service employees and teams whose contributions have made a positive difference in the province. Congratulations, Scott, on your nomination: hopefully you’ll have another plaque to accompany your Silver Award in the fall.