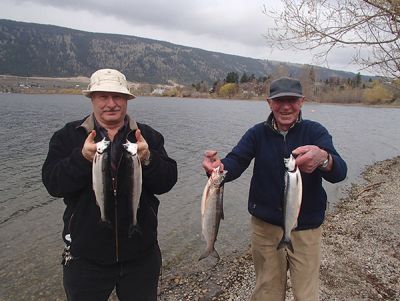 Wood Lake kokanee may not be large fish, but in terms of economic and social impact, the fishery is huge: worth an estimated $1 million a year—all put at peril when the kokanee population crashed in the fall of 2011.

Dubbed “one of the last remaining high-effort kokanee fisheries in Canada,” it’s a highly-accessible fishery that yields a large annual harvest and provides year-round angling opportunities for people of all skill levels, notes Hillary Ward, Fisheries Stock Assessment Specialist for the Ministry of Forests, Lands and Natural Resource Operations.

She says conservatively it supports more than 15,000 angler days a year and more than $1 million in direct expenditures related to angling.

Because it’s vitally important to restore the kokanee numbers in this small Central Okanagan Lake, the Habitat Conservation Trust Foundation, a BC environmental granting organization, is funding a plan to figure out what caused the problems and how to resolve them.

Since 2012, HCTF has put nearly a quarter million dollars into the problem, and that expenditure has nearly doubled with contributions from other sources, in a project that is a collaboration of the Ministry, the Oceola Fish and Game Club, the Okanagan Nation Alliance and the District of Lake Country.

Wood Lake anglers realized something was wrong in 2012 and voted to support a ban on fishing in the lake until the problem was identified and corrected, but members of the Oceola club have been involved in efforts to enhance that fishery for more than three decades.

Danny Coyne is Fisheries Director for the club, and says its volunteers have worked to take eggs from some of the spawning kokanee each fall to incubate over winter and return to Middle Vernon Creek—the main spawning tributary to the lake—in spring. However, incubation has stopped now because they realize such drastic measures are only needed to jump-start a failing population, rather than on an ongoing basis. Volunteers now help ministry staff count spawning kokanee at a fish fence and efforts are underway to replant riparian areas that have been degraded.

It’s been determined that water quantity in Middle Vernon Creek and water quality in Wood Lake has been the major threat to kokanee populations.

In dry years, there has been limited water available in the creek for kokanee to spawn and in the fall of 2011 numbers collapsed due to unusually warm water temperatures and low oxygen levels in Wood Lake.

With the help of the HCTF project, the kokanee population has been intensively monitored, both in Wood Lake and in Middle Vernon Creek. Angler surveys have also been conducted to estimate harvest.

As well, hydrometric stations were set up with the help of the federal government and the Okanagan Basin Water Board at key points in the watershed, to assess the water balance and see where changes could be made to ensure adequate flows in late summer and fall help spawning kokanee survive.

Ward is confident that, armed with the watershed data from the past few years, they can improve the system’s balance, controlling flows by changing releases from Beaver Lake so there’s adequate water left in the lower part of the system in September when kokanee return to spawn.

From that, a water management plan can be created which will help ensure the long-term survival of Wood Lake kokanee, but also take into account the needs of humans, aquatic plants that occur along the shores of Ellison Lake and other users along the way.

With a forecast of significant numbers of kokanee returning to spawn this fall, the fishery in Wood Lake has been re-opened this year, from Apr. 1 to Aug. 31—good news for all concerned.

Written by Judie Steeves for the Habitat Conservation Trust Foundation