BC Students to Attend the World Recreational Fishing Conference

The eighth World Recreational Fishing Conference is happening next week in Victoria. As Official Education Sponsor for the event, HCTF is happy to be sponsoring four BC post-secondary students to attend the conference. They are: 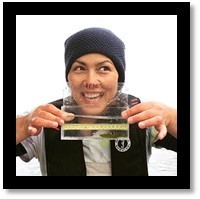 Midoli is a MRM Candidate at Simon Fraser University. She was born and raised in north eastern British Columbia, but moved to Vancouver Island in her early teens. Her father decided to take up commercial salmon trolling, which he did for several years before making the switch to become a recreational fishing guide. Through his influence, Midoli’s love of fish and fishing was born. She returned to northern BC to complete her undergrad degree in fisheries and wildlife management at the University of Northern British Columbia. While at UNBC, she took as many fisheries classes as possible and worked in a genetics lab on bull trout and Dolly Varden hybridization rates. While still at school, she began working for the Hakai Institute, where she was the lead field tech on a project studying forage fish and nearshore fish community ecology. In 2016, Midoli began graduate studies at Simon Fraser University and is a student in the Quantitative Fisheries Lab under Dr. Sean Cox. Her research focuses on testing methods to incorporate emerging abundance trends into management procedures for data-limited stocks. 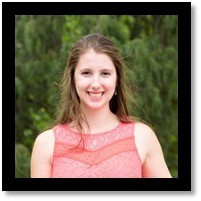 Melissa is a 4th year undergraduate student at Thompson Rivers University. She anticipates receiving her Bachelor of Science degree in Ecology and Environmental Biology at the end of 2017. As a devoted fly fisher, she has a passion and concern for the health of freshwater systems/networks. Upon receiving her degree, she intends to gain field experience to broaden her knowledge and identify potential concerns in preparation of pursuing a master’s degree in Environmental Science. In her free time, Melissa loves to tend to her garden, tie flies for her next excursion, and contemplate how to spend the rest of her life with a line in the water.

Scott is a first year master’s student at UBC, working in the Institute of Oceans and Fisheries. His research, being conducted at Kawkawa Lake in Hope, British Columbia, is centered on how fishing pressure and physical conditions in the lake affect the size and abundance of the lake’s main game species, kokanee salmon. Scott graduated from Capilano University in 2014 with an associate’s degree in biological sciences, and in 2016 from UBC with a bachelor of science in biology. 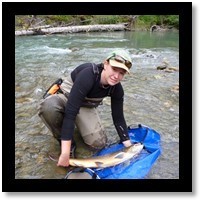 Rachel is a PhD candidate at the University of British Columbia working with Dr. Murdoch McAllister and Dr. Brett van Poorten. Her PhD research focuses on the meta-population structure and population dynamics of fluvial bull trout within the Upper Fraser Watershed (UFW), British Columbia. Rachel’s thesis research is being conducted in collaboration with the British Columbia Provincial government with the goal of expanding our understanding biological limits to sustainable harvest of bull trout based on meta-population structure, seasonal movements, and juvenile compensatory survival. The outcomes of Rachel’s thesis research will be used to help inform provincial managers in their decision making for the management of this species, both within the UFW and beyond. Prior to starting her PhD, Rachel completed her MSc. with Dr. Villy Christensen at UBC focusing on management and regulations shaping Canada’s commercial Dungeness crab fisheries and completed her BSc. Honours at Dalhousie University in Halifax, Nova Scotia working with Dr. Boris Worm. She has also spent time working on juvenile lobster settlement and lobster maturity with both Fisheries and Oceans Canada and the Fishermen Scientists Research Society in Bedford, Nova Scotia.

The students will be sharing their WRFC highlights with us following the conference. For live updates, follow @WRFC on Twitter.