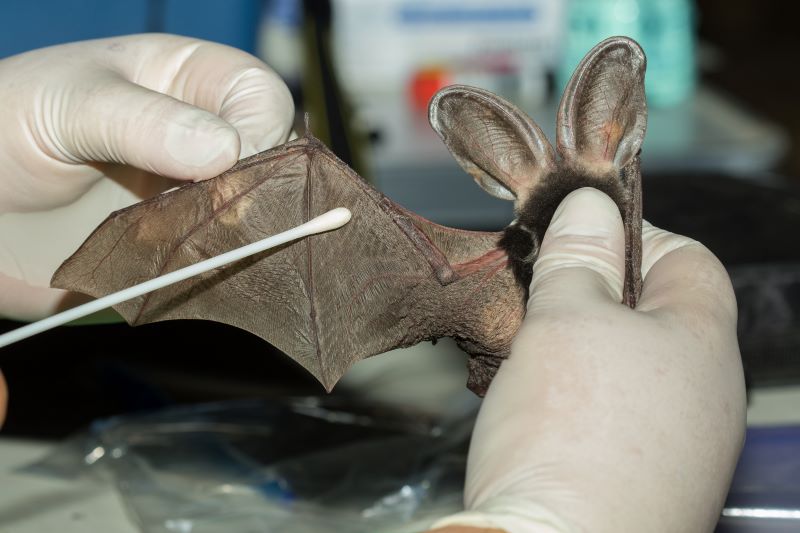 This spotted bat’s wing is being swabbed to look for bacteria that naturally prevent growth of Pd, the fungus that causes WNS. Photo: Jared Hobbs

Organizations working to protect BC’s threatened bat species just got a boost — over $185,000 in grants to monitor bat populations, encourage public participation in bat conservation and support research into a promising new probiotic that could prevent white-nose syndrome.

The grants are part of a multi-million dollar investment by the Habitat Conservation Trust Foundation (HCTF) and Forest Enhancement Society of BC (FESBC) into wildlife conservation projects happening this year.

The “Got Bats?” project is a BC-wide network increasing bat conservation through community involvement. Implemented by the BC Conservation Foundation, “Got Bats?” encourages public participation in annual bat counts that promote bat stewardship while collecting valuable information on bat population numbers. Other activities include promoting bat-friendly communities, working with landowners to preserve colonies, building bat houses, and providing information on bats through presentations at schools and community events.

Mandy Kellner, coordinator of the “Got Bats?” program, says support from HCTF and other funders has allowed the program to respond to record numbers of enquiries about bats via email (info@bcbats.ca) and their toll-free information line (1-855-922-2287). “We want to make sure British Columbians have a resource where they can get accurate information about bats,” says Kellner. “Bats are an essential part of the ecosystem, eating insects and controlling agricultural and forest pests, but misinformation and fear can really have a negative impact on efforts to protect existing colonies.” Kellner says the program’s community outreach and citizen science initiatives are also important in the fight against another serious threat to bats, white-nose syndrome.

White-nose syndrome has killed millions of bats in the eastern U.S and Canada since 2006 and was found in Washington State in 2016. Cori Lausen, a bat specialist with the Wildlife Conservation Society of Canada, is leading two HCTF-funded projects so B.C. is ready if the disease is found here. “Bat species in the west are hard to monitor because they hibernate in small numbers in trees and rock crevices, and occasionally in buildings,” she says. “Through these projects, we have great baseline data so we will know when white-nose syndrome arrives, and have developed a probiotic and applicator so we can help the bats survive if it does. It’s a race against the clock, involving cutting-edge work where we continue to learn something new every day.” 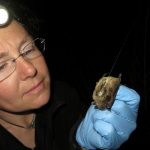 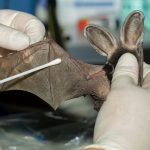 Caption: This spotted bat’s wing is being swabbed to look for bacteria that naturally prevent growth of Pd, the fungus that causes WNS. Photo: Jared Hobbs