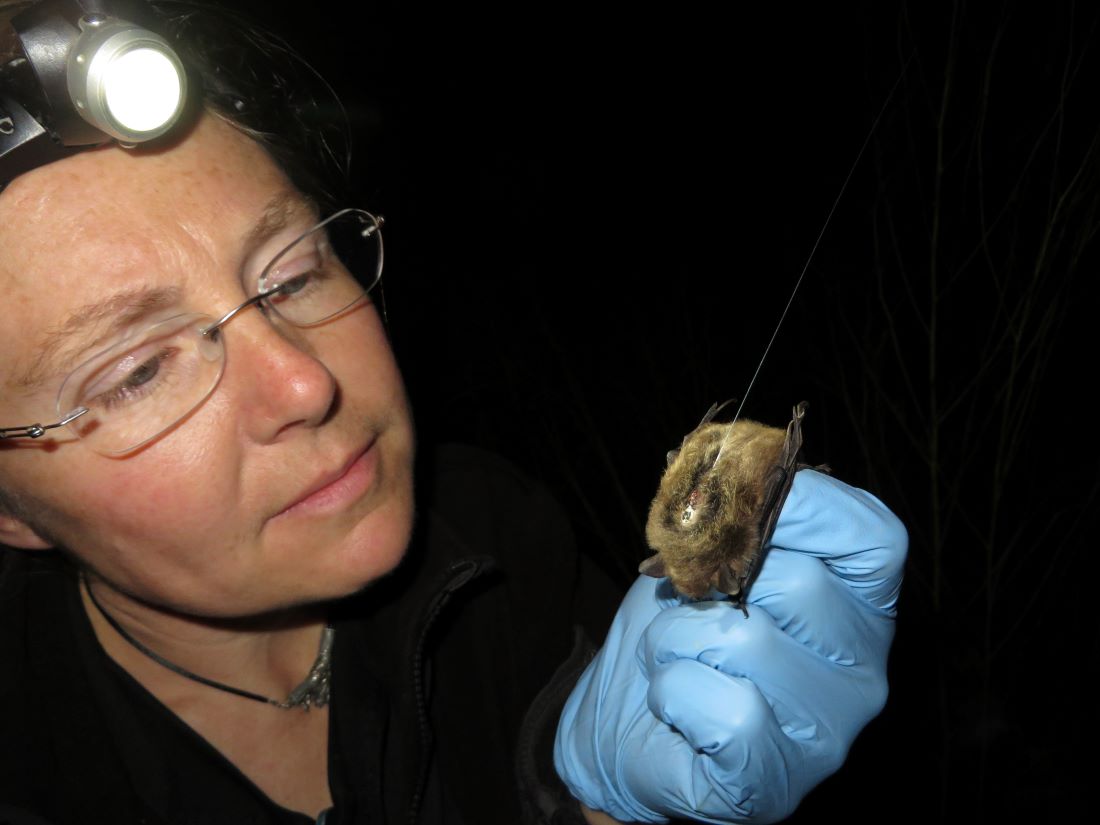 Cori Lausen glues a transmitter onto a bat in fall which will help locate roosts as well as provide valuable information about hibernation behaviours and physiology, needed to understand how white-nose syndrome may impact bats in BC.

The first time Cori Lausen held a big brown bat in her hands, it was love at first sight. “She was so tiny, she fit in my hand. And the band showed that she was older than I was.”

The more Cori learned about bats, the more she realized how unique they are – and when she asked questions about them there were often no answers. “There are so many things we just don’t know about them.”

So she took a leave of absence as a high school teacher in 1999, earned a Masters’ degree on bat ecology at the University of Calgary and a PhD in bat population genetics.

Today as associate conservation scientist with Wildlife Conservation Society Canada, Cori is looking for ways to protect western bat populations from deadly white-nose syndrome (WNS). This includes cutting-edge research supported by Habitat Conservation Trust Foundation (HCTF) to develop and apply a probiotic cocktail that can help bats survive the disease. HCTF has contributed nearly one fifth of the $583,000 budget for the two-year project.

WNS originated in Europe and is caused by the fungus Pseudogymnoascus destructans. It first appeared in North America in New York State in 2006, and has since killed millions of bats. “Many of us shed tears when we first heard of it,” Cori says. “We did not understand it, but knew its devastation was going to spread like wildfire.”

The disease started in the east and gradually moved south and north. Its spread west was slower because of migration patterns, until 2016 when it made a giant leap into Washington State. “The jump was a big shock,” says Cori. She expects the infected bat hitched a long-distance ride on a transport truck going to the port in Seattle, highlighting the importance of checking trailers, campers, and trucks for stowaway bats.

WNS causes a white fungal growth across a bat’s muzzle and wings, and has a death rate of up to 100 per cent. It disrupts winter hibernation, rousing the bats so they use up the valuable fat reserves they need to survive until spring.

There’s an added challenge in western North America because there are no large bat hibernacula like in the east. Instead, bats overwinter in smaller numbers in rock crevices, trees, caves and mines, and even in some buildings.

Cori was already interested in what bats in western Canada do in winter when WNS appeared in Washington State, and thanks to help from many BC naturalists, had detected eight of the 14 species that overwinter in British Columbia. “When the fungus first showed up, we realized that understanding where bats are is now more than curiosity – it is absolutely urgent.” 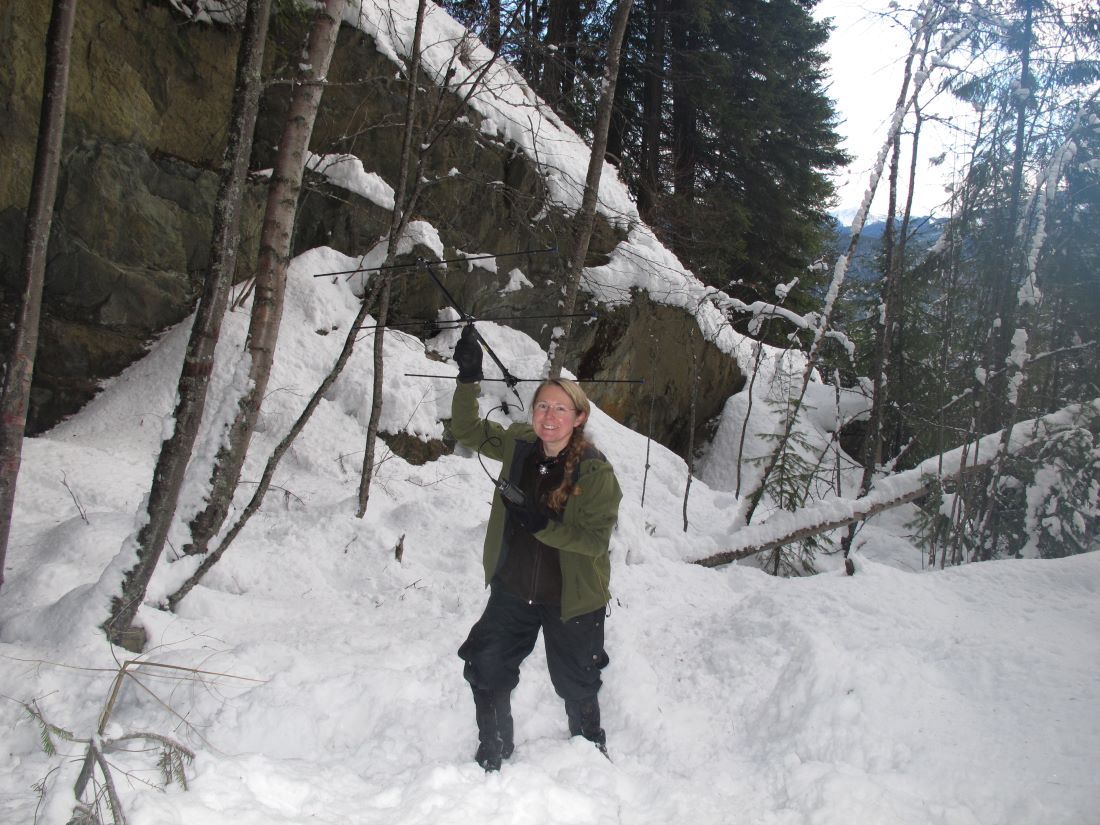 Cori Lausen tracks bats in winter in the West Kootenay region. Telemetry is used to locate hibernacula, as well as provide valuable information about hibernation behaviours and physiology, needed to understand how white-nose syndrome may impact bats in BC.

But with few locations and few bats, these winter hibernacula are unlikely to yield a solution to the WNS problem. “We need a ‘made in the west’ approach to fight off the fungus, and set them up to come back in the spring alive,” Cori says. “We decided to target our vulnerable building-roosting bats as we know where thousands of them roost in the summer.”

Through the HCTF project, the researchers developed a probiotic using bacteria sourced from local healthy bats. They first tested it on captive bats at the British Columbia Wildlife Park in Kamloops in 2018.

This spring, they developed an application method, and will test it in the Vancouver region where WNS will probably appear first in British Columbia. At roost entrances, they will dust powdered clay infused with the probiotic, so it sticks to the bats and they get a small dose every time they come and go.

“We are the first to propose treating bats in summer, introducing probiotic gradually so it does not overwhelm their immune system,” Cori says. “We will take wing swab samples from the bats now, and repeat in spring to see if the probiotic is still there and still viable.” 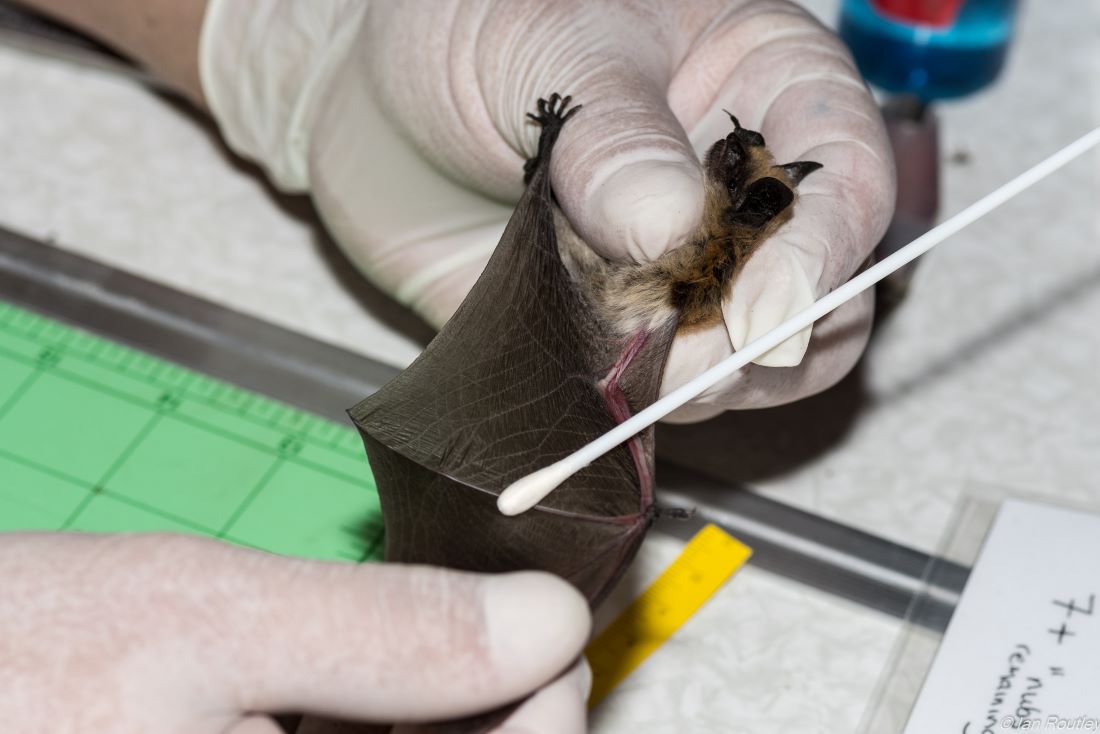 A California Myotis bat from Lillooet BC is wing-swabbed to look for bacteria that naturally prevent growth of Pd to use in the development of the probiotic cocktail. Photo by Ian Routley.

Purnima Govindarajulu, acting head of the B.C. Ministry of Environment and Climate Change Strategy’s Conservation Science Section, is part of an advisory committee supporting the project. “Bats are an important part of a healthy ecosystem,” she says. “White nose syndrome could have serious repercussions in British Columbia because bats eat huge number of insects, and this benefits agricultural crops, forests and people.”

British Columbia is better positioned than many other western regions thanks to BC Community Bat Programs (www.bcbats.ca/) that encourage individuals to identify roost sites and show landowners how to protect these sites or install bat-houses.

“We know white nose is coming so we have nothing to lose,” says Cori. “It does not cost a lot to give a landowner a little bag of clay that they can dust into bat boxes or building roosts. If it looks like it will save bats, we will apply for further research support to develop a widespread approach.”