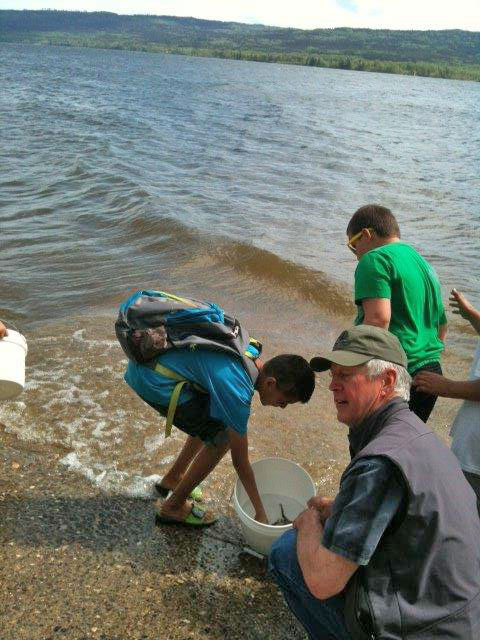 HCTF Board Chair Ross Peck helps out with the lake trout release at Moberly Lake.

When the Province began the Moberly Lake rehabilitation program back in 2010, there were less than 400 trout in the lake. Their extreme drop in numbers was thought to be caused by a combination of overfishing and competition or predation from other fish species. Historically, Moberly Lake’s lake trout were an important part of the local First Nations fishery and a favourite of local anglers, but the lake has been closed to all trout fishing since 2002, and is closed to all fishing from September 15 to October 31 to protect lake trout during their spawning season.

Last Tuesday’s lake trout release was the third release of the rehabilitation program, for a total of 36,000 released fish. The Ministry is hopeful these releases will aid in re-establishing a stable lake trout population on Moberly Lake. Over the past four years, the Habitat Conservation Trust Foundation has provided funding to the Ministry to evaluate the effectiveness of their lake trout recovery program. As well as continuing to monitor the total number of lake trout in Moberly, staff are also tracking the survival, growth, fitness and reproduction rates of the stocked juvenile lake trout. The information collected will help detect shifts in the Moberly Lake fish community and hopefully identify why survival of juveniles is low, in the hopes that a long-term solution can be found.