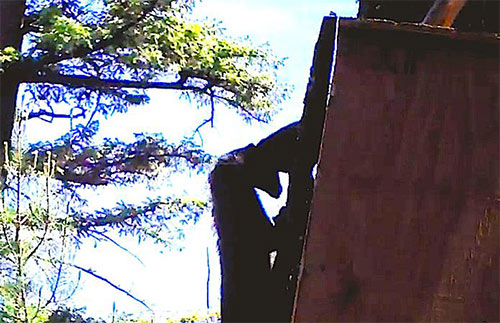 It's a little hard to make out, but in this photo, Inga the fisher is working hard to remove her kit from the artificial denbox. Fisher moms frequently move their kits around, and Inga later returned with her kit and its sibling to the denbox.

We received the following video update on the Fisher Artificial Den Box Study from biologist Larry Davis. Davis and his team are trying to determine if female fishers will use human-constructed den boxes to raise their young, as there are very few of the fisher’s natural denning sites left in some areas of their range. “Fisher require large diameter trees with heart-rot cavities for reproduction,” says Davis. “These trees are rare in managed landscapes.”

2015 was the third year of this HCTF-funded project, and Larry and his team continued monitoring the 56 installed den boxes to see if they were being used by fishers.

“We have been successful in attracting fishers to 50% of the den boxes, with many of the structures used for resting during winter,” reveals Davis. “We identified 45 fisher samples using hair snaggers located at the entrance to the den boxes. Of these, 14 were identified as being unique females, with 8 of them using the structures more than once, and 4 of them detected at 2 different den boxes.”

During the 2015 reproductive season, two fisher females used artificial den boxes to give birth to and raise their young. The video features footage of “Debbie”, who gave birth to one kit in April 2015. Davis explains that fisher moms often move their kits around, and Debbie was no exception: the video shows her leaving the den box with her kit on April 8th and returning the kit to the den box at the end of May. In the Chilcotin, 2 kits were photographed inside a den box on April 8, 2015. A trail cam set up to document the female (“Inga”) and her kits using the den box again in early June, 2015.

Davis has continued monitoring the den boxes in 2016 and reports there are already 3 being used by female fishers. We look forward to receiving an update on how the moms and kits are doing later this year.