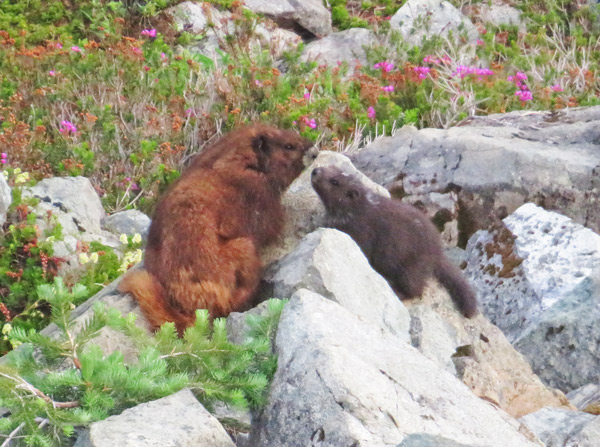 Molly the Marmot and one of her six pups. Photo by Jordan Cormack.

Earlier this year, a field crew on an inventory trip made a surprising, and welcome, discovery in Strathcona Park . A new marmot mom, Molly, had six pups! Veteran Field Crew member Jordan Cormack managed to snap some photos of the busy mom and her brood. Vancouver Island Marmots usually have 3 or 4 pups once every second year and field teams have only seen litters of six weened pups a few times, never in Strathcona Park.

Less than 10 years ago, no marmots remained in Strathcona Park, and it has been a struggle at times to re-establish the species there. Historically, the Park was part of the Vancouver Island Marmot’s range, but the species was extirpated from the region sometime during the 1990s, with only a small handful surviving nearby at Mount Washington Alpine Resort. Re-establishing the marmot in the Park is an important part of the Recovery Plan for the species. In addition to being a large protected area within the marmot’s former range, marmot habitat in the Park may be more resilient as our climate changes.

Re-introducing a vanished species is never simple, and Strathcona Park is particularly challenging. Weather and terrain in the Park are harsher than in the marmots’ more southern colonies. Even more difficult was the loss of marmot “infrastructure” – burrows and hibernacula – that disappeared when the marmots were extirpated from the Park.

It is immensely rewarding to see a large litter of wild-born pups there. It suggests that Molly must have great body condition, which in turn means she must have had a good hibernaculum, and likely the support of a small, but functional, colony at her home on Castlecrag. 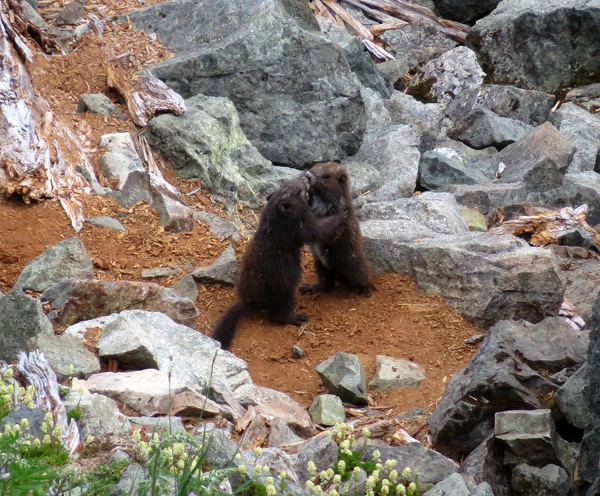 Playtime for two of Molly’s pups. Photo by Jordan Cormack.

Molly’s litter is a small step towards the recovery of her species in Strathcona, and a hopeful sign that the species is beginning to find ways to thrive in this beautiful and rugged wilderness. That Molly and her brood have this chance at all is due to the partners, donors, and funders, including the Habitat Conservation Trust Foundation, that have supported re-introduction work.

A huge thank you to Adam Taylor, Executive Director of the Marmot Recovery Foundation, for sharing this project update with us. The Reestablishing Vancouver Island Marmots in Strathcona Provincial Park project is funded in part through HCTF’s North Island Conservation Fund.