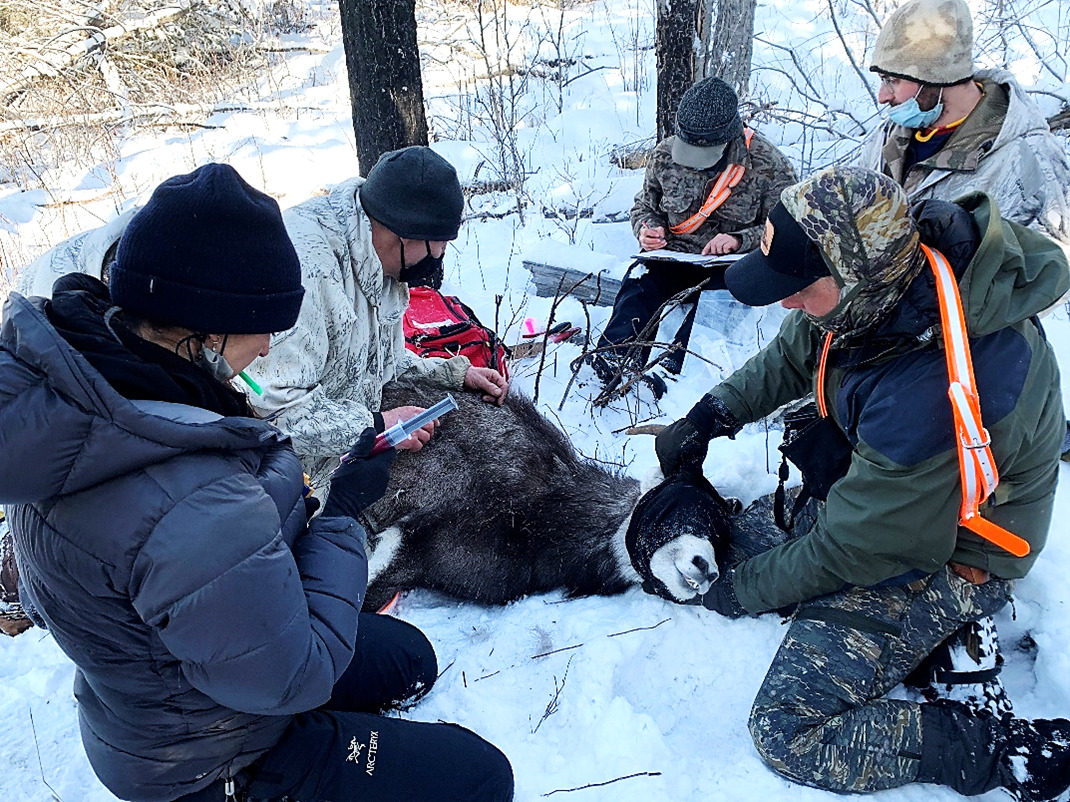 Stone’s sheep, one of four wild sheep species in North America, can range dramatically in size and in colouring, from white to chocolate brown and black, so these sheep perfectly blend into the habitat around them. But for all we know of their beauty and range, little is known about their health and behaviour.

The mountainous areas of northern British Columbia support approximately three-quarters of the global population of Stone’s sheep, and recent genetic data confirmed that BC is home to all genetically pure populations. Also called Thinhorn sheep, which includes the subspecies Dall’s, the Dunlevy and Schooler Stone’s sheep are the southernmost extent of their range. Therefore, conservation of this subspecies is of great concern given their habitat and genetic uniqueness.

In 2020, HCTF began funding a project to study Stone’s sheep in the Dunlevy and Schooler ranges, and the project is now entering its third year. Project team lead Robin Routledge of Wild Sheep Society (WSS) believes that as BC supports the global population of this species, it is important to understand Stone’s sheep and work to protect and enhance the habitat in which they live. 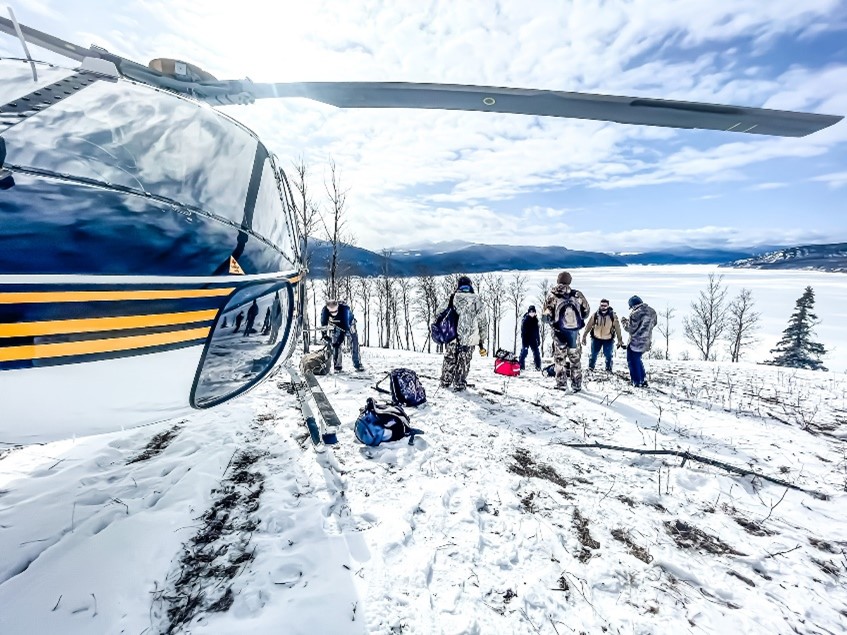 Recently, some concerns had been raised about potential impacts from domestic livestock and local elk herds on Dunlevy and Schooler herds, and the ecological and health conditions of the herds have not been monitored since 2005. The Dunlevy herd range is directly adjacent to ongoing anthropogenic disturbance including development and recreation. One key concern is the potential transmission of pathogens from domestic breeds to wild sheep, particularly Mycoplasma ovipneumoniae or “MOVI”; an infectious parasite that results in a deadly form of pneumonia.

The WSS of BC teamed up with Wildlife Infometrics Inc. to reinitiate a monitoring program of these herds and compare new health data to that collected in previous years (1999-2005). The hope is that this information will guide herd management and inform habitat planning and enhancement projects for First Nations and stakeholders.

In 2020, the team, along with local First Nations, started the capture and collaring of several individuals within the Dunlevy herd, and a small number of individuals in the Schooler herd. This was the first successful deployment of collars in the Schooler herd, for a total of 6 active collars in 2020, and an additional 10 collared animals in 2021 among both herds. The collars will help the team gather data on home ranges, and understand key habitat features the sheep are utilizing, to eventually inform habitat enhancement plans. Collars were distributed between ewes and rams (dependent on age, suitability, and access); an important aspect for well-rounded data as ewes tend to stay closer to a core area, moving seasonally and during lambing, while rams tend to forage outside core areas over greater distances.

But the team decided to try a novel approach to capture and collaring, and used a method called “drive netting”. To the project team’s knowledge, this project is the only time the drive netting method has been used in BC since it was last used in the previous study on these same sheep (Wood et al. 2010). Essentially the team identified where the sheep congregate and then deployed approximately 100 – 150 meters of net about 6 feet high. Ten or more people stationed around the area spread out hanging the net in place while a helicopter cautiously moved the herd towards it. The sheep are caught in the net and that’s when the team can capture them for processing (health samples and collars). The team has found great success with this method, and it seems to cause less stress for the animal as the overall disturbance or impact time is shorter than with other more traditional methods. 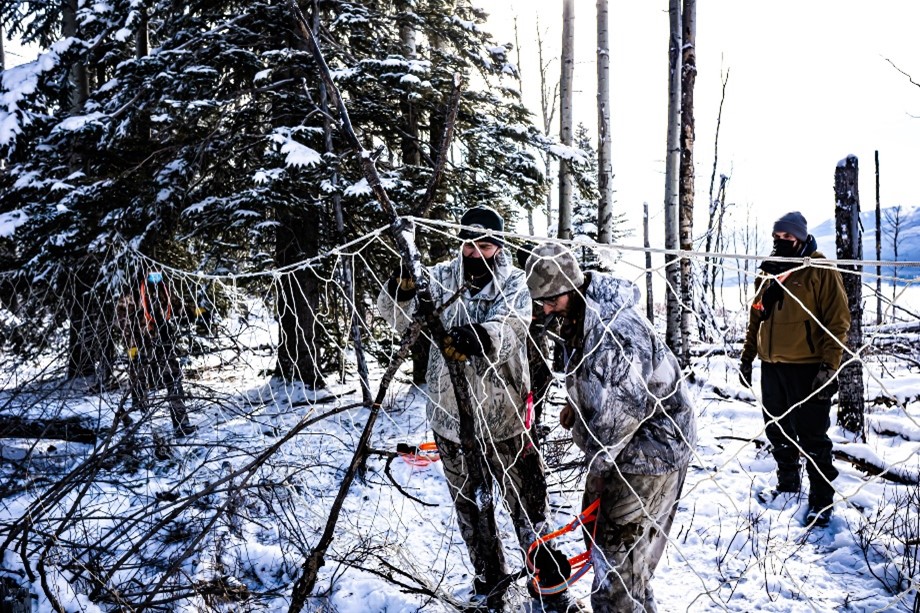 At the time of capture, the team collected health samples, and laboratory results indicated that all sheep captured in 2020 were negative for five viral and bacterial pathogens commonly carried by domestic ruminants, including MOVI. One ewe captured in 2021 tested positive for parva influenza virus. When this virus was found previously in Dall’s sheep, it was not associated with the death of the animal, but it can lead to mortality in Bighorn sheep. More research is required to assess the effects of this virus on Stone’s sheep as data is limited.

Then the team stumbled upon something in their 2021 spring ground surveys that worried them: two ewes in the Dunlevy range had died during lambing season due to complications associated with giving birth; something that is considered very rare among Thinhorn sheep. The team is still waiting on results to determine the cause of this, but in one of the ewes it appears that the lamb came out head and shoulders first (as opposed to hind legs first) and was not able to pass through the birthing canal.

In 2020 and 2021 lamb surveys were conducted in summer, winter, and spring utilizing both ground telemetry and aerial telemetry methods to obtain better overall confirmation of lambs, but also to compare the two methods. It was found that ground telemetry methods were the least disruptive and provided the best information for lamb at heel. Aside from the rare occurrences mentioned above, lamb numbers are looking strong for the Dunlevy herd. As for the Schooler herd, it was hard to draw conclusions with such limited data, but one lamb was observed there.

Given that this type of data has not been collected in approximately 15 years, some unexpected results also arose to shed further light on the health conditions of the herds. Fecal samples indicated that the Williston sheep (part of the Dunlevy herd) had a significantly higher stress level than other herds measured in the Cassiar and Dome areas. This may be due to range overlap of the Williston sheep with elk herds, and the associated tick load and potential resource competition (something that has been found in previous studies). More research is required to assess the effects of range overlap with other wildlife herds such as elk, and overall stress levels of the wild sheep herds. 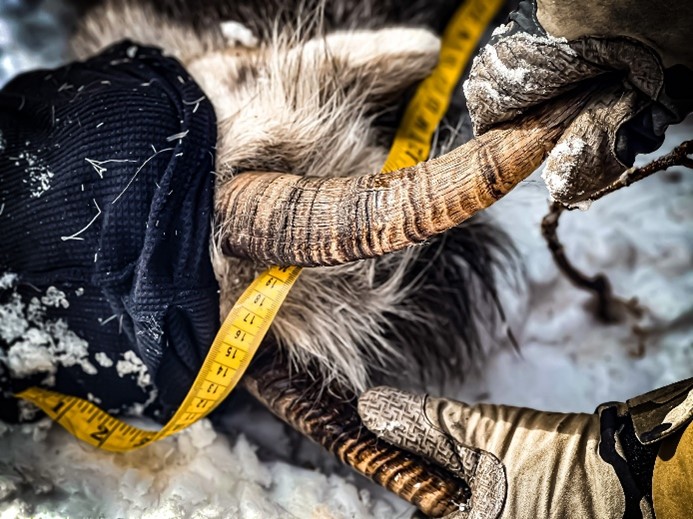 Population estimates indicated that while the Dunlevy herd was within normal population levels, the Schooler herd may have undergone significant declines. Only 8 individuals at one time have been observed. The team hopes that with four collared individuals in the Schooler herd, and more planned, as well as upcoming population surveys, more can be learned about their range possibly leading to additional groups of sheep being located.

Lastly, the team looked at a condition known as “lumpy jaw”, which is prevalent in North American wild sheep and is most common in Stone’s sheep. It is caused by the consumption of sharp forage items, especially needles, which become lodged in the gums. This often leads to bacterial infection and inflammation of the mouth resulting in bony proliferations; however, studies indicate that lumpy jaw does not seem to have any serious effects on the life expectancy or overall health of the sheep. Given that there is limited information on the effects of lumpy jaw on wild sheep, in all future mortality investigations the team will be collecting and examining mandibles for deformities and abnormal tooth wear that may be indicators of lumpy jaw.

Crews are keen to return to the field for surveys this spring to continue to gather data from Stone’s sheep herds to better understand this rare species, and in turn, better manage the herds and their habitat for generations to come. 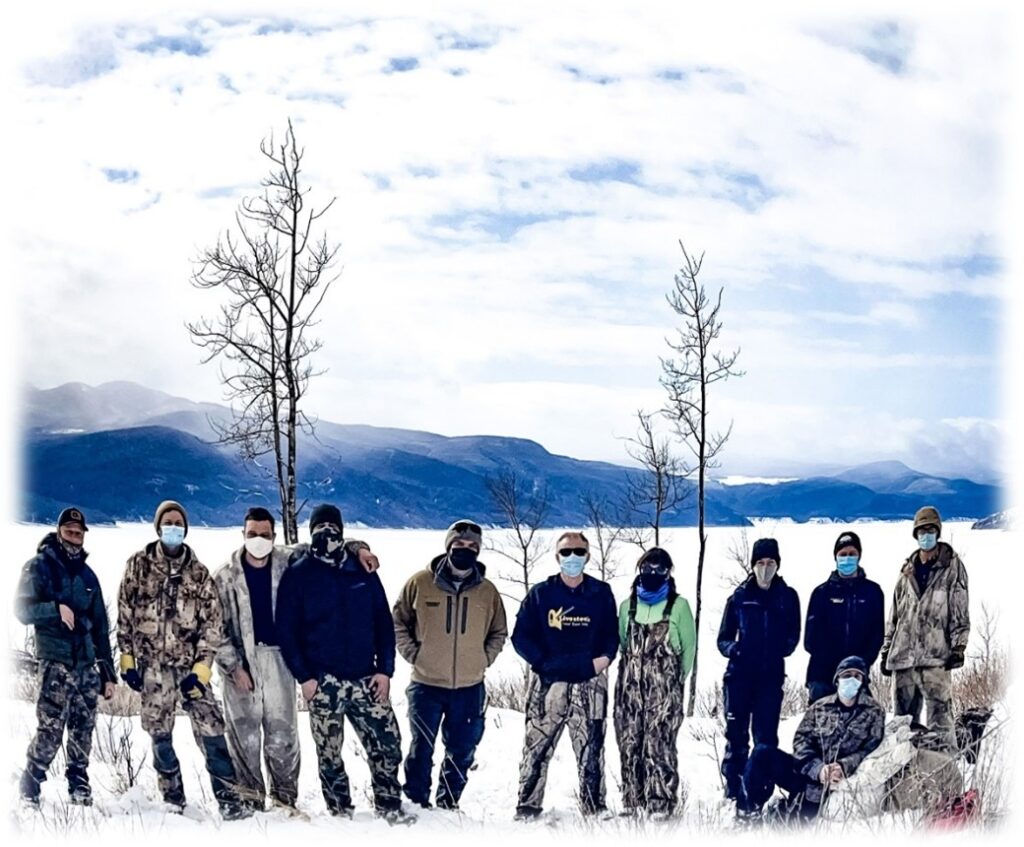