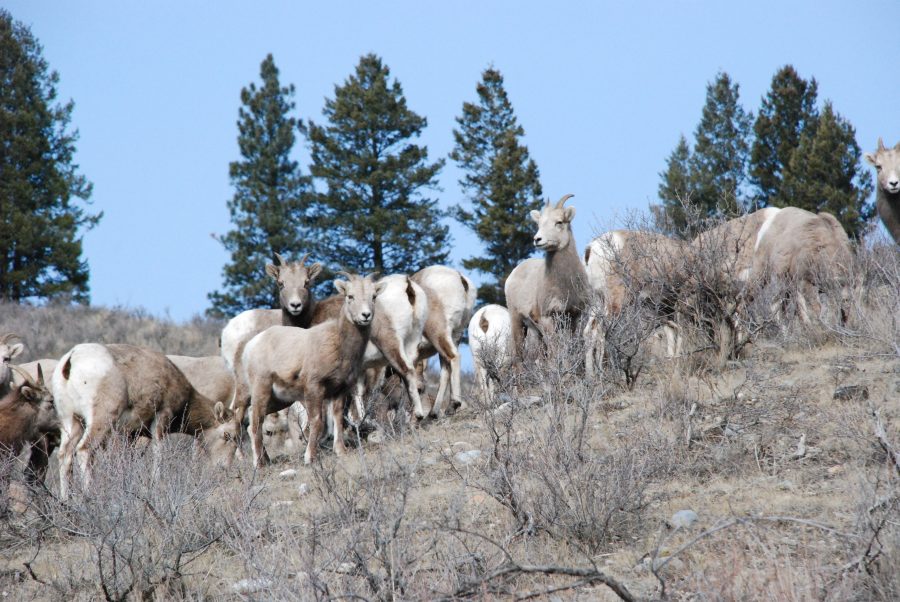 2008 photo of the Bull River bighorn herd. Beginning in 2009, wildlife managers noticed a rapid spread of yellow hawkweed and other invasive plant species in this herd’s winter range.

Bighorn sheep are well suited to the rugged mountains of southeast British Columbia. But it’s a tough life, and it’s even tougher when invasive plant species crowd out nutritious native forage.

The BC Ministry of Forests, Lands, Natural Resource Operations and Rural Development is in the midst of a five-year project to manage invasive species on three critical sheep winter ranges in the region – near Bull River, at Wigwam Flats east of Elko, and at Columbia Lake East north of Canal Flats. The Habitat Conservation Trust Foundation is contributing approximately $160,000 to this project.

“Loss of habitat is one of the reasons why Rocky Mountain Bighorn Sheep are blue listed as vulnerable in BC,” says ministry wildlife biologist Irene Teske of Cranbrook, who is leading the initiative. “By reducing invasive plant species, we can increase the quality of grasslands in southeast BC and improve habitat for bighorn sheep and other ungulates.”

Invasive plants alter habitat by displacing native vegetation. They reduce soil productivity, impact water quality and quantity, threaten biodiversity, and alter natural fire regimes. They can be bitter tasting and some even cause health issues or death. A 2016 Forest Practices Board report on rangelands identified invasive plants as an issue that threatens the sustainability of rangelands in the long term. 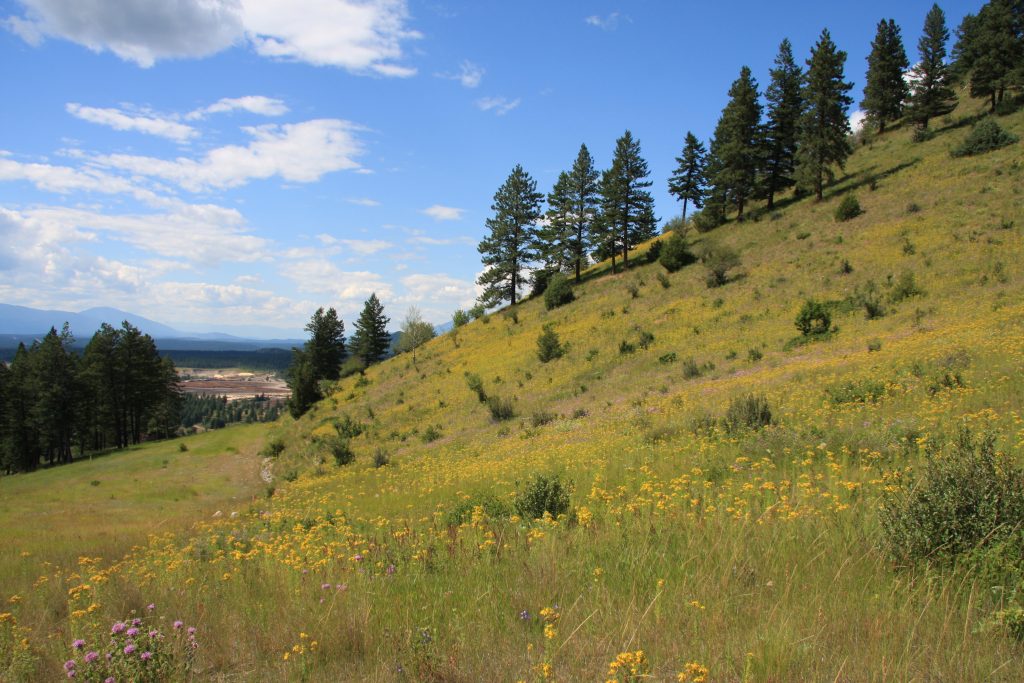 Early in the 2000s, it appeared that spread of invasive species was somewhat under control in Bull River, and herbicide treatments focused on transportation corridors. The situation in Wigwam Flats was similar thanks to previous herbicide treatments (HCTF project 4-303) and biocontrol for knapweed and St. John’s wort. In about 2009, wildlife managers noticed reduced habitat quality for low-elevation ungulate winter ranges due to a rapid spread of yellow hawkweed, declining effectiveness of biocontrol for St. John’s wort, and continuing infestations of sulphur cinquefoil and spotted knapweed.

“We proposed a five-year project using a variety of methods to control these invasive species and try to restore natural grasslands, including chemical treatments, biocontrol and seeding/fertilizing,” Irene says. “We have also established vegetation sampling plots so we can monitor the change over time.” 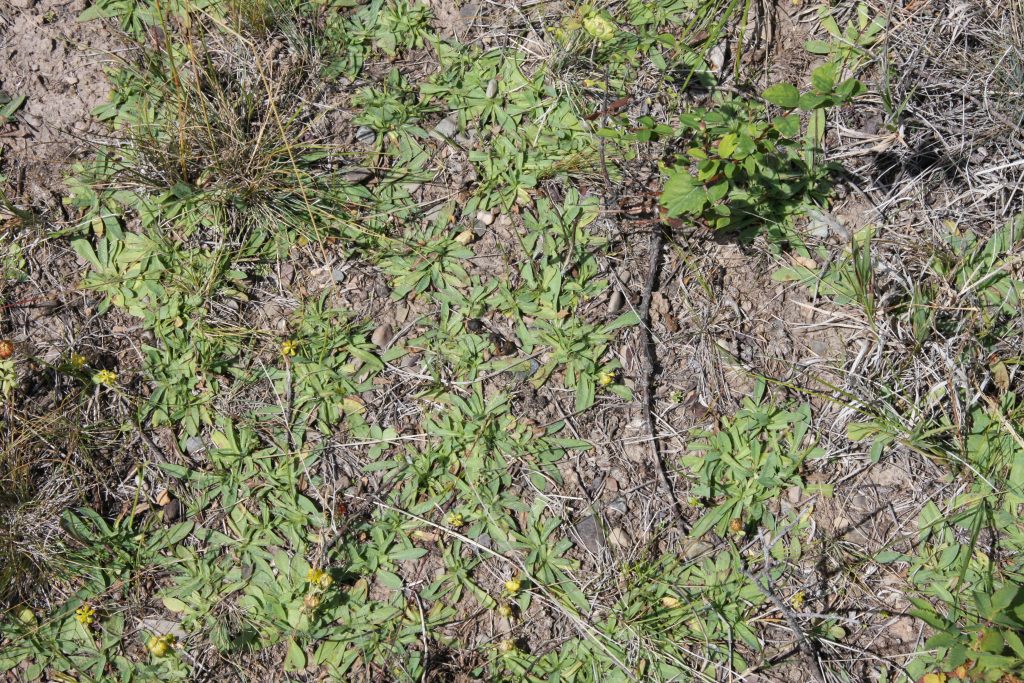 Close up of Yellow Hawkweed taken at the Wigwam Flats study area.

So far it appears the treatments are working. In some plots, the coverage of invasive plants dropped from as much as 13% to as little as 1.6%. And bighorn sheep populations are up slightly, although this could be for a variety of reasons such as low snowfall or reduced predation. “We are certainly under no illusion that the problem has been fixed,” Irene says. “It is vitally important to keep these areas free of aggressive invasive plants so we will need ongoing periodic management to maintain the positive outcomes.”

A literature review in 2017 showed that the best option to control the invasive plants is through early detection and treatment of small sites. If the infestation gets too extensive, it requires a long-term management plan to replace weeds with desirable species, manage the land carefully, and prevent new infestations.

In 2018, 18 plots were resampled in Bull River and Wigwam Flats following treatment. The monitoring showed that invasive plant coverage in the two study areas had dropped substantially, total grass cover had increased slightly, and there was more bare ground where weeds had been removed. It is important to re‑establish vegetation on this bare ground as soon as possible to discourage the return of the unwanted species.

There are plans to continue herbicide treatments in spring 2019, with seeding in selected areas in the fall and fertilization trials in spring 2019 and 2020. Permanent vegetation plots have been installed and will continue to be monitored to determine the success of the treatments.

This project includes ministry staff from the wildlife, habitat and range divisions, and landowners such as BC Hydro, Nature Trust of BC, Nature Conservancy of Canada, and TransCanada Pipelines. The East Kootenay Invasive Species Council has been involved in some of the herbicide spraying, and Irene says that all contractors have done exceptional work, adding “we could not have done much of this without the dedication and high standards of the backpack herbicide crew from Crabbe Contracting who have been working in some very difficult terrain.”

Irene says a lot has been learned through the project, and many of the findings can be applied to other areas. Range agrologist Hanna McIntyre from the ministry’s range program agrees: “In areas where cattle grazing and bighorn sheep winter range overlap in the Bull River, we are working closely with range agreement holders in an effort to improve bighorn sheep habitat.”

Another example is work by biologist Catherine Tarasoff from Agrowest Consulting Scientists. In 2018, she studied whether St. John’s wort is becoming resistant to the Chrysolina beetle, used since the 1950s as a biocontrol. “Land managers were telling me St. John’s wort was increasing when they had been told it was under control,” Catherine says. “We found strong evidence on one site that the plants were producing a higher level of predatory defense chemicals, which drive off the insects. It’s not surprising – if you use the same vaccine for 70 years you would expect the target to develop resistance over time.”

The lesson learned, she says, is that all available tools need to be used to tackle invasive species – biological, chemical, mechanical and cultural. “What’s most important with resistant plants is to get rid of them before the resistant gene spreads to other plants.”

Another key element of the broader ministry project is public education. A new education sign about the Rocky Mountain Bighorn Sheep herd will be installed at Bull River this year. It reminds visitors to respect the conservation property complex, and offers tips on what they can do to limit their impact on sensitive wildlife.

“Without a doubt, the best way to protect native plant species and natural habitat is to make sure land users learn how to spot invasive species and report them to government through a Report-A-Weed app or website,” says Todd Larsen, a range habitat specialist with the ministry. “It’s also important to follow best management practices such as washing equipment, recreational equipment, and boots or clothing to avoid spreading invasive species.”

Invasive species are one of the leading threats to native wildlife and plant communities in BC. Report-a-Weed and Report Invasive apps let you report invasive species sightings anywhere in BC in a few quick and easy steps. Learn more about the apps at www.reportaweedbc.ca/.