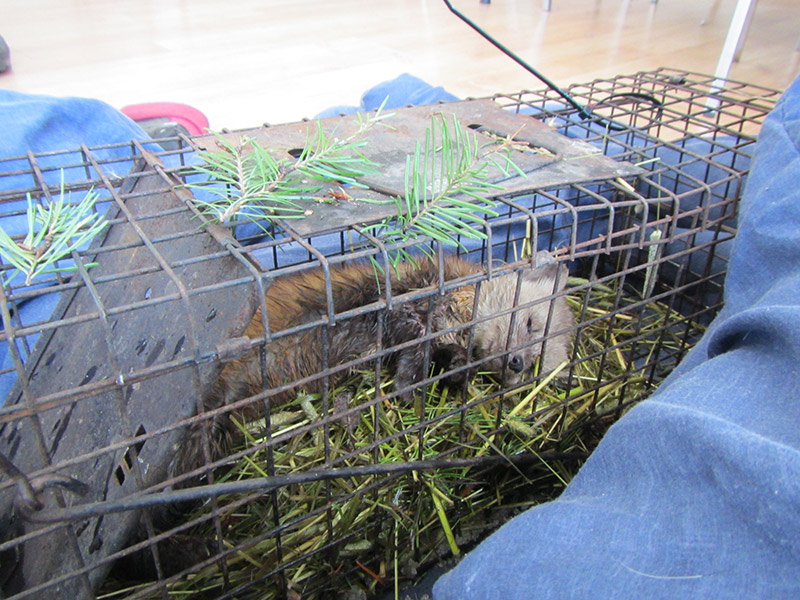 A marten recovers after being fitted with a GPS collar. Animals are anesthetized using isoflurane, as it is quickly expelled from the system. They have fully recovered by the time they are released back into the wild. Photo Credit: Willa Crowley

In the frozen wilderness of North-central BC, a small, furry head pops out from under the snow. Its fox-like profile stands out against a creamy orange bib of fur. In a flash, the animal’s long, lithe body and bushy tail spring from the powder. It is an American Marten (Martes americana), a medium-sized mustelid known for its tree-top acrobatics and cat-like curiousity. She boldly lopes across the snow towards a tasty morsel, conspicuously placed to entice her into a cage trap disguised with branches and straw. Marten are commonly trapped for their pelts, but this cage won’t spell her demise. Instead, she will become part of a ground-breaking study examining marten’s movements, and how they might be affected by forestry practices.

Shannon Crowley, a researcher with the John Prince Research Forest (co-managed by UNBC and T’laz’ten Nation), and his colleagues check the study traps daily: if they’re lucky enough to get a marten, they fit it with the latest in GPS collars before releasing it safely back into the forest.

“They’re tough little critters,” confides Crowley. “Based on our experiences capturing them, they’re not fearful at all. We’ve had marten in cage traps that we’ve released, only to have them come back moments later to steal a piece of bait sitting right next to us.”

Crowley and his colleagues are working on their second year of an HCTF-funded project to determine how marten populations are affected by salvage logging of Mountain Pine Beetle-ravaged stands. They are comparing the species’ use of logged and unlogged areas by remotely tracking the movements of their collared subjects.

“We’re working with very new technology,” explains Crowley. “Really, this study is pioneering the use of GPS collars light enough to go on an animal this size. To my knowledge, we and a group in Scotland are the only ones to have tried them on marten.”

The general rule of thumb for tracking collars is that they shouldn’t exceed 5% of an animal’s body weight. The collars used by Crowley and his team are below that threshold, sitting at around 3%.

“The marten really don’t seem to be bothered by them,” says Crowley. “We happened to get a video of one of the collared animals at one of our remote camera sites, and he was heading up into the trees, behaving very much like a typical marten.”

Above: Video showing typical marten behaviour. These curious creatures often travel under the snowpack, but are equally adept at climbing trees. See more videos of marten and other mesocarnivores filmed in the John Prince Research Forest at the end of this post.

Crowley says the location data from the new GPS collars is a significant improvement over what they could previously obtain using radio units.

“We’re pretty impressed: we’re getting the kind of movement data that we could have never gotten in the past,” says Crowley. “Getting a location used to be very labour intensive, especially in harsh winter conditions. We would typically get about three locations a week. Now, we’re averaging between six and twelve locations a day.”

The increased amounts of data allow Crowley and his team to examine how marten are moving across the landscape at a much finer scale. “Previously, we could see where they were, but we couldn’t see how they got there. Now, we have a clearer picture of how they’re using different habitat types.”

Crowley’s team has been working closely with local forest company Conifex to compare martens’ response to different logging practices. Eventually, their results could be used to inform forest management decisions so as to reduce the impact on marten, as well as other species.

“Marten have proven to be really good indicators of ecosystem health,” emphasizes Crowley. “They’re generally associated with mature forests with lots of structural complexity, which are also important for animals such as woodpeckers and mule deer.”

Though Crowley’s marten study is a short-term project, the data collected will become an important component of a long-term monitoring program focused on mesocarnivores, a group that also includes fishers, river otters, foxes and Canada lynx.

“The mesocarnivores encompass a diversity of species that require different habitat types,” explains Crowley. “Studying one species alone can tell you something, but when you look at a bunch of them together, by inventorying and surveying in different habitats, they can give you a much better idea of what’s happening on the landscape.”

This level of understanding is particularly important when considering the rapid rate of environmental change associated with salvage logging. Though marten populations as a whole are thought to be stable in BC, they have become endangered or even extirpated from other jurisdictions through habitat loss.

“Research like this is really about taking preventative action, so that marten don’t become endangered in BC as a result of land use practices.” Crowley states.

Despite the economic pressures to maximize timber harvest, Crowley remains optimistic about the potential for this research to make a positive difference for habitat conservation. “Within the forestry industry, I think there’s definitely an appetite for finding ways to reduce impacts. Wildlife and habitat have definitely become part of the conversation, though we still have a long way to go before wildlife values are incorporated as a standard practice.”

The John Prince Research Forest is the largest research forest in North America, more than 32 times the size of Vancouver’s Stanley Park. Situated 50 km north of Fort St. James, the JPRF lies between Lakes Chuzghun (Tezzeron) and Tesgha (Pinchi)in traditional Tl’azt’en territory and provides research opportunities for UNBC staff and students and education and employment opportunities for the local community. Check out some of the other amazing wildlife footage captured by remote cameras in the forest (submitted to us by Shannon Crowley):