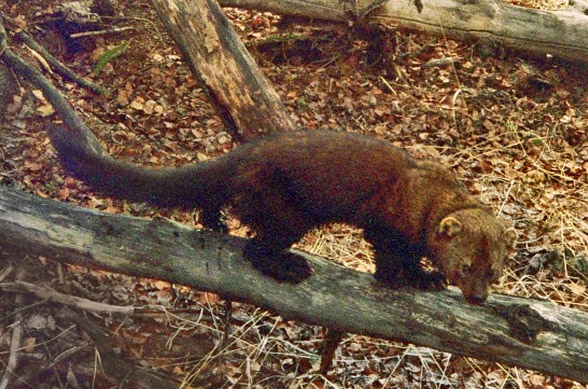 Photograph of Fisher by Larry Davis

What’s furry, fierce and likes to dine on porcupine? It’s the fisher, Pekania pennanti, a member of the weasel family that is seldom seen in the wild, but is an important part of British Columbia’s carnivore community. Despite its name, fishers do not fish and are dependent on forests for all their life history needs. The fisher is blue-listed (threatened) in BC, largely due to habitat loss. Female fishers require large diameter trees with cavities to birth and raise their young. They will only use cavities with entrance holes that are approximately 8 – 12 cm in diameter: large enough for them to squeeze into, but small enough to keep larger predators away from their kits. Den trees also need to have other trees and shrubs around them to allow the female approach her den unseen. These specific requirements (along with the fact that females usually require multiple cavities to accommodate the growing kits) make fisher populations extremely vulnerable to extirpation through loss of suitable denning habitat.

In the Bridge River Watershed, north of Lillooet, BC, fisher habitat has been impacted by the creation of two large hydro-electric reservoirs, large-scale fires, mountain pine beetle, and an ongoing history of forest harvesting that is dominated by clear-cut systems. Understandably, there is concern about the combination of these habitat impacts on local fisher populations.

The Habitat Conservation Trust Foundation and BC Hydro funded a three-year project that would provide an accurate population estimate for fishers in the Bridge River watershed, as well as estimate the distribution, abundance, and supply of potential reproductive dens. In-kind support for this research was provided by the Lillooet Tribal Council, BC Ministry of Environment, and the BC Trappers Association.

Fisher expert Larry Davis and his research team determined fisher density estimates using a winter hair snag survey. Davis explains: “We used sticky mousetrap paper to pull a sample of hairs from fishers that were attracted to traps baited with a chicken wing. Fishers trying to get the wing would press against the mousetrap paper and leave a hair sample behind for us to collect. We sent the samples to a laboratory specializing in wildlife genetics that identified the samples by species, sex, and individual identity.”

“Of course, we captured many other animals that went after the bait,” Davis continues. “We even had one wolverine chew the top half of the trap off.”

In the end, Davis and his team were able to identify 8 different fishers from the data, some of which were captured multiple times. The data was inputted into a computer program that used this information to estimate that there were 14 fishers in the 771-km2 study area. This yields an estimate of 18 fishers per 1000 km2: relatively abundant when compared to estimates from elsewhere in BC.

“It’s important to note that this estimate is based on only one season of sampling and animal numbers can vary considerably between years,” clarifies Davis. “Also, only three of the 8 fishers sampled were females and some are likely to be young from last year’s litter or transient animals. Despite this caveat, Davis believes that “the Bridge River area supports a healthy population of fishers, and that a sustainable population can be maintained if important habitats, such as den sites, are retained in managed forests” 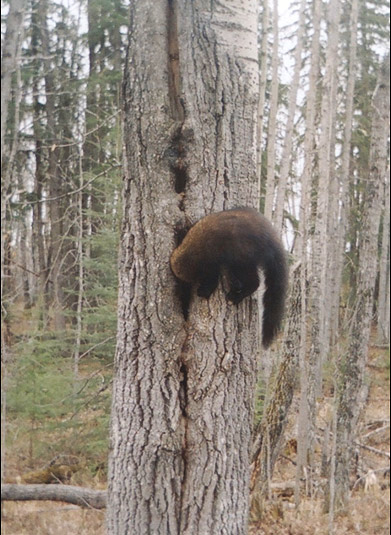 To estimate the number of trees that would make suitable fisher den sites, Davis concentrated on areas where track transects had found fisher. Potential fisher den trees were identified as those meeting the following criteria:

The “right species” criterion was based on previous research that found fishers using cottonwood, balsam poplar, trembling aspen, Douglas-fir, and lodgepole pine as den trees in BC. Common to these tree species is that they can have extensive heart-rot forming large internal cavities while the tree is still living. Other trees, such as spruce, also get heart-rot, but don’t maintain the hard exterior shell that preserves the standing tree and cavity for many years. The minimum tree diameter depends on the tree type, but is generally large for the particular tree species.

Davis and his team estimated the number of potential trees in the landscape by counting the number found in 1 hectare transects distributed across the study area.

“It turns out that trees meeting all our criteria are rare in the landscape,” says Davis. “Even in the ‘best’ habitat, there was less than 1 tree in 2 ha, and most forest types had much lower densities of potential den trees.” As Larry explains, the actual densities may be even lower still: “There is one additional criterion a fisher would have that we couldn’t easily check – the size of internal cavities. Cavities large enough for a female fisher and her kits are estimated at 25 – 30 cm in diameter, based on the size of an average female and internal measurements we have taken at fisher dens. Given this, fisher reproductive dens are likely to be much scarcer than we think, but our estimate provides a starting place for making recommendations to forest companies on targets for protecting fisher den trees.” 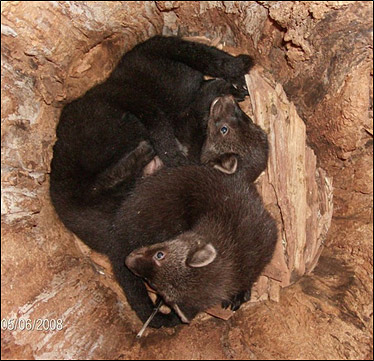 So how are these findings being used to inform fisher management? These results, combined with the findings of more than 20 years of fisher research in BC, have been used to create management recommendations and targets for fisher habitat. Davis and his colleagues have created a website summarizing this information at www.bcfisherhabitat.ca . For foresters and government, the website supplies targets on the amount of area and number of structures fishers need for breeding, resting, foraging, and movement habitats. This means tenure holders, such as trappers, can use this information to ask foresters how they are meeting fisher targets for logging operations on their trap lines.

“Fishers are a blue-listed species in BC, and forest professionals are legally required to manage landscapes to help maintain this species,” says Davis. “The website allows the BC Fisher Working Group an opportunity to continue working with trappers, government, the forest industry, and others to update and refine management strategies for fisher in a timely fashion.” Davis and his team have also created resources to encourage private landowners to preserve suitable den trees on their land (view). “Preserving these types of trees not only help fishers, it also benefits around many other native species reliant on them for their continued survival.”

Many thanks to Larry Davis for supplying much of the information and images for this article. In recognition of the fact that studies like this one indicate suitable fisher denning habitats are becoming increasingly rare, HCTF is currently funding a project to determine if artificial den boxes will be used by reproductive fishers, and the extent to which these devices might mitigate the loss of natural denning habitat. Check back here for future updates on this project.

The scientific name for fishers was formerly Martes pennanti, putting them in the same genus as marten. Fishers recently acquired a new scientific moniker as a result of DNA analysis proving that (despite appearances) they are actually more closely related to wolverines (Gulo gulo) than martens, but still distinct enough to warrant a separate genus, hence, Pekania pennanti. Discoveries like this are great examples of how we still have a lot to learn about wildlife, even those species in our own backyard!

View updates about this project>>